As per the existing provisions of the law, the IBC cases should be resolved within 270 days. But there are cases which have not been resolved even two years after they were admitted due to appeals and litigation The Insolvency and Bankruptcy Code (IBC), one of Narendra Modi-led government's most under-stated reforms, was losing its soul and spirit to many judicial pronouncements, so much so that experts had started writing its obituary. Not only were the cases not being resolved on time - within the 270-day limit prescribed in the law - unnecessary judicial 'interventions' were changing the law's basic character, defeating its purpose.

In order to reverse this trend and reinstate the trust of financial institutions and investors, the government has proposed some changes/clarifications. Of course, these changes have to be passed by Parliament, but for now, the government seems to have sent a strong signal that it will not allow one of its biggest reforms to die due to judicial overreach. We look at the impact of the proposed changes.

Time-bound completion of resolution process: As per the existing provisions of the law, the IBC cases should be resolved within 270 days. But there are cases which have not been resolved even two years after they were admitted due to appeals and litigation. Till the end of March 2019, there were 1,143 ongoing insolvency cases, of which 362, or 32 per cent, had already breached the 270-day deadline. The amendments try to address this issue by increasing the time limit to 330 days to account for delays due to litigation and other judicial processes. 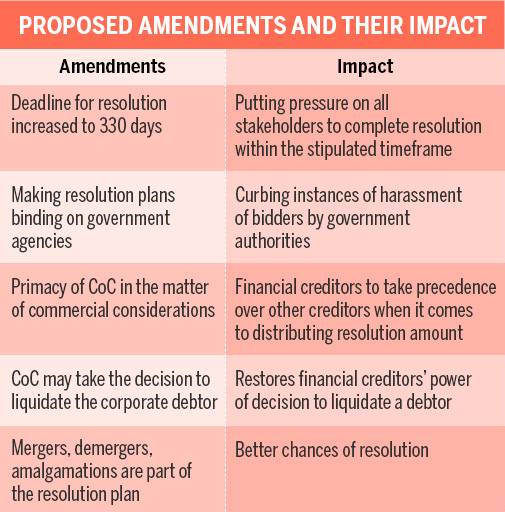 "The judiciary, in the name of principal of natural justice and giving all parties fair hearing, kept giving indefinite dates. Judges used to think that they can exclude the litigation period from the stipulated time. Now, the amendment says that whatever happens, it has to finish in 330 days," says Mamta Binani, a high court lawyer and a resolution professional.

But what is the rationale for increasing the timeline to 330 days? L. Charanya, Partner, Lakshmikumar & Sridharan, says the 330-day figure is not arbitrary. "There was a report submitted in the court during the Swiss Ribbons (insolvency) case and I think it says that the average time taken for completion of a case is 300-odd days. That's why they increased the timeline to 330 days," she says

But will it address the issue of delay? Will this put pressure on stakeholders to ensure timely disposal of cases?

Divyanshu Pandey, a partner in law firm J Sagar Associates, says the new time limit may put pressure on litigants as they will now realise that there are consequences of delaying the process forever.

However, Ranjana Roy Gawai, Managing Partner of RRG & Associates Law Offices, says there are times when judicial delays become unavoidable. "In smaller cases, where the money involved is not large, you hope to get timely resolutions, but where the debt involved is in excess of Rs 40,000-50,000 crore, proper judicial procedures have to be followed," she says.

The amendment also lays 'greater emphasis on the need for time-bound disposal at the application stage'. While the application should ideally be admitted within 14 days, in many cases, says Mamta Binani, it has taken almost a year for cases to get admitted in the National Company Law Tribunal (NCLT), the adjudicator under the IBC. Financial creditors back in driver's seat: The law was drafted with the objective of giving financial and secured creditors control over the insolvency process because they have more skin in the game. But subsequent legal pronouncements have in a way diluted this power of committee of creditors (CoC). This is especially true in case of Essar Steel in which the National Company Law Appellate Tribunal, overriding CoCs' powers, devised a mechanism to distribute the resolution amount.

To ensure that CoCs retain primacy, the amendments propose that 'commercial consideration in the manner of distribution proposed in the resolution plan' will remain within the powers of the CoC. "By having a specific language, the proposed Bill will put an end to any ambiguity in interpretation that the CoC is the one that will decide on the resolution plan," says Pandey of J Sagar Associate.

"A lot of time, central and state governments do not stake claim on their dues, and once the resolution is passed go to court and say they were not aware of the insolvency. Often, judges would then give sympathetic hearing, noting that public money is involved. This kind of thinking disturbs the whole fabric of the code," says Mamta Binani. Divuyanshu Pandey says government authorities will now be forced to put their claims (with the resolution professional). Earlier, they avoided this so that they are not bound by the resolution plan and can pursue their case after the process is over.

The amendments also clarify that comprehensive corporate restructuring scheme such as mergers, demergers, amalgamations will be considered as part of the resolution plan. Mamta Binani says this is more a clarification than a change. L Charanya says inclusion of alternative structure is a very important amendment. Earlier, it was like you-live-or-you-die kind of situation.