On December 8, India's largest automotive component manufacturer Bosch in a statement to market regulator SEBI warned of disruption of supplies to its customers in the last quarter of this fiscal as it was facing a severe shortage of micro processors that are imported in the country.

The company said a surge in demand for semiconductors from the consumer electronics industry partly due to the rise in 5G connectivity has led to a demand supply gap in the global market. Suppliers especially those in Europe from where Bosch sources the components, are prioritising other sectors over automobiles. 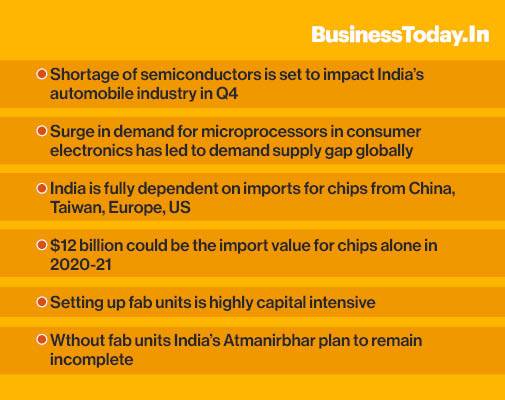 "As an outcome, imports of Bosch Ltd has been impacted with severe supply shortage for Imported micro-processors (semiconductors), leading to reduced ability to deliver to the automotive market demand in India," the company says. "Restoration of normalcy in global supply situation for imported components and impacts are being very closely assessed and addressed on top priority."

Bosch may not be the only component maker to suffer but the impact of this will be felt all over. The German firm supplies components to almost every car, two-wheeler and commercial vehicle maker in the country.  Two days later, utility vehicle major Mahindra and Mahindra admitted in a regulatory filing that it would be impacted by the disruption at Bosch.

"The operations of the company in the automotive sector will be affected by the global supply shortage of micro-processors (semiconductors) used in electronic control unit (ECUs) which is supplied by Bosch," Mahindra says in a regulatory filing. "The company is engaging closely with Bosch and assessing likely production loss for the last quarter of FY 2020-2021 on account of this supply disruption as also steps to be taken to minimise the impact of the same."

Microprocessor chips are an essential part of electronics today, which in turn finds widespread use in modern automobiles in the ECUs-engine control unit that ensures optimal performance of the engine, and even advanced safety systems like ABS (anti-lock braking system). The problem for industries in India and it is not just restricted to the automobile sector, is that they are not produced in the country at all and are almost entirely sourced from outside. Countries in the Europe, US, China, Taiwan, Indonesia and South Korea are major sources of semiconductors for India.

"It is still not clear as to what extent and for how long the shortage of semiconductors will impact vehicle production in India. Any stoppage of vehicle lines has a resonating effect on the entire auto component manufacturing  ecosystem," says D K Jain, president, Automotive Component Manufacturers Association (ACMA). "The electronic content in vehicles has been progressively increasing and incidents such as these only precipitate the need for localisation and self reliance in auto electronics in the country."

Setting up microchip manufacturing facilities commonly referred to as fabrication units, is not easy. Semiconductor manufacturing involves front end fab manufacturing and back-end assembly. While India has developed considerable expertise in the back end-packaging and testing, there are only a handful of companies globally that produce chips on a large scale. None of them are in India. As a result, almost all of the chips, units and displays are imported into the country. Estimates suggest on chips alone, the value of imports for India could be in excess of $12 billion in 2020-21.

While India has been trying to set up fab units since 2005, none of them have taken off. Currently there are only two such units in the country-a DRDO unit SITAR and another Chandigarh-based lab which makes chips only for defence and space related use. While the government has launched ambitious programmes like the PLI scheme that incentivises local production of electronic components, it is unlikely to attract investments in fab units, which is very capital intensive. Setting up even a mid-sized fab unit entails an investment of $8 billion with very high running costs. Further, it needs to be upgraded every four years, which again is capital intensive. Only a handful of firms in India has the balance-sheet strength for this. And none of them have any appetite for it yet.

The complexity of the manufacturing can be gauged by the fact that till date India does not even produce the printed circuit board assemblies (PCBA) in scale locally. PCBA is the foundation board that holds various other electronic components like resistors, integrated circuits (basically the semiconductor chip), capacitors and transformers, which are welded or soldered on to it.

According to India Cellular and Electronics Association (ICEA), the current market size for PCBAs in India is $16 billion (2019-20), which is expected to grow to $87 billion by 2025-26, representing a $71 billion opportunity in the domestic market alone. Thanks to the PLI scheme for mobile and smartphones  launched by the government at the start of this fiscal, it expects 90-99 per cent of PCBAs to be now locally assembled. Smartphones comprise over 80 per cent of the PCBA market in the country.

Additionally, ICEA has said there is a potential for exports for India valued at $109 billion between FY 2021-26. For that, it has said the government needs to provide an incentive of 6 per cent on free on board value of exports. Without any incentive, the potential dwindles to just $4 billion.

"As more electronics manufacturing is set up in India - this may in turn, bring in more vendors and players. Over a period of about five years, India might be able to boast of a credible electronics manufacturing ecosystem," the ICEA report says. "If the scale gets sufficiently large, it could trigger the design and manufacturing of multilayer PCBs in India. Production of semiconductor chips Assembly, Testing, Marking and Packaging ('ATMP') could also become a reality. This is how it had panned out in China."

Manufacturing PCBAs, however, is a far simpler proposition as compared to producing chips. But it will be a start nevertheless.

"We have just about started the journey of becoming self-sufficient in the area of electronics and there is quite some distance we have to cover," says Pankaj Mohindroo, chairman, ICEA. "Manufacturing semiconductors is very high tech and capital intensive and will probably be the last step. There are many intermediary steps we have to take first and production of PCBAs is one such step. Once we start to do that the ecosystem will automatically be created for chip manufacturing."

The disruptions due to shortage of semiconductors that the domestic automobile and consumer electronics industries are likely to face from January in India reiterate the need for manufacturing self-sufficiency in the country. It also lays down the marker of the arduous journey ahead. Without the chips, Atmanirbhar Bharat will be incomplete.