Soon after the spread of coronavirus, FM Sitharaman, in a relief to the employees and employers, reduced the mandatory monthly EPF contribution to 10 per cent of the basic salary from 12 per cent for the months of May, June and July A good part of your hard-earned salary each month goes into employee provident fund (EPF) on which the government gives you decent return to assist you with your retirement savings. Being backed by the government, it is one of the most dependable channels for retirement investment for majority of salaried people. However, recently the reports claimed that the EPFO will credit interest rate on your EPF investments in two tranches (8.15 per cent now, and 0.35 per cent by December 31). The confirmation is awaited, but it has been a concerning issue for EPF subscribers who wondered if all is well with their EPF investment. Be as it may, they have nothing to worry about. It's a guaranteed return that the government has to credit to all subscribers. But the news does raise questions on how EPFO manages its six-crore subscribers' money and whether it is transparent about it.

"The EPFO subscribers were eagerly waiting for the details of credit of interest rate when split interest rates news hit headlines. The very next day, the clarification came that they will do it in one go. Usually the interest rate credit happens around August. One will have to wait and watch what happens on that front. But, one thing is sure that subscribers should not be concerned about losing out on the interest amount. There could be liquidity issues with the EPFO this year due to easy withdrawal policy announced by the government in May, but the subscribers will surely receive 8.5 per cent interest rate for FY20," says Anil Chopra, Group Director - Financial Wellbeing, Bajaj Capital. 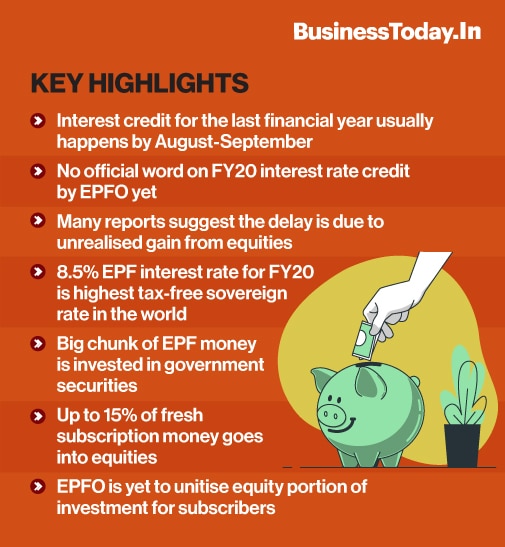 Soon after the spread of coronavirus, Finance Minister Nirmala Sitharaman, in a relief to the employees and employers, reduced the mandatory monthly EPF contribution to 10 per cent of the basic salary from 12 per cent for the months of May, June and July. Besides, it also allowed EPF subscribers to withdraw an amount equal to three months of basic and dearness allowance (DA) or 75 per cent of the credit balance in the account, whichever is lower for them.

Following the relief measures, the EPFO saw huge withdrawals, while fresh contribution fell at the same time. Moreover, due to steep fall in the stock market, the equity portion of EPF investment incurred losses, while a record low level of policy interest rate in the economy pulled down the returns from government securities too.

This may have prompted EPFO to consider crediting EPF interest amount in two tranches although there is no official statement from the labour ministry on it yet. There is no official word on the EPFO liquidity issue too. EPF subscribers can only wait for the announcement. The labour ministry needs to come clean on the ongoing confusion as public money is involved. It is their fiduciary responsibility towards the subscribers to clear the doubts.

How EPFO invests your money

Since a good part of your salary goes into the EPF, you should indeed be curious about where EPFO invests your money and how it manages to give you attractive tax-free return, which is higher than g-sec yield. The following table gives you a bifurcation of EPFO investment: For long, it had been argued that giving returns higher than g-sec will not be possible for EPF unless some money went into equities. It's only in 2015 that it was decided that 5 per cent of fresh EPFO money will be invested in Nifty and Sensex ETFs. In the following years, the limit was hiked to 15 per cent. Now EPFO invests in ETFs of Nifty50, Sensex, CPSE and Bharat 22 indices.

"The total amount invested in equities will just be about 5 per cent of overall EPFO kitty of about 18 lakh crore," says Jalan.

Nifty and Sensex aside, the EPF investment in CPSE ETFs and Bharat 22 ETFs has often been questioned given the two ETFs have not performed well over the last many years. "Ideally, their equity investments should go into the broad market index ETFs like Nifty 50, Nifty 100 , Nifty 500 etc as opposed to CPSE ETFs. Such an investment will be far more broad-based and will help in capturing all sectors and high-quality stocks out there," says certified financial planner Suresh Sadagopan.

Another issue that EPFO is yet to sort out is distributing ETF units among all subscribers, called unitising, so that they are aware of value of their equity portion of investments. Currently, no such segregation between debt and equity portion of investment has happened at the subscriber level. "It was not thought through initially as to how EPFO will divide profits and loss from the equities among all subscribers. Since equity portion was less than 1 per cent in the beginning, it was decided that let the money come first before we take a policy action on it," says Jalan.

"Unitising will require improvement in the accounting system. EPFO has not even attempted to start the process yet, that is what I learn," he adds.

How to lessen interest rate burden

Jalan makes a case for having differential rates as per the salary of subscribers. "There should be two rates of interest payment - higher for those not getting any income tax benefit, slightly lower for those who do get some tax benefit and lowest for the ones earning much higher, who tend to make a mockery of the system by investing 1-2 crore in EPF every year."

Not everyone sees merit in the suggestion. Chopra of Bajaj Capital terms it a regressive step, saying one cannot invest more than 100 per cent of basic salary in the EPFO anyway.

Sadagopan agrees. "I am not for such differential rates. Ultimately, it should be sustainable and should be equitable for everyone. If something more is to be given for those with lower income, the government should chip in for that. It should not be at the cost of those who are contributing diligently as per the laws of the land."

The EPFO investment does need reforms and more transparency, but to give credit to the government, at a time when 10-year government-security (g-sec) yield is hovering around 6 per cent, in which the highest amount of EPF money flows, the EPFO is giving 8.5 per cent interest. "We have the highest tax-free sovereign interest rate in the world," says Chopra.

BT Buzz: Are home loans with shorter reset under MCLR beneficial for you?