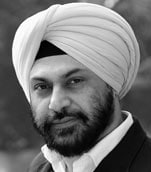 Amarjit Singh Batra is the CEO of OLX India (www.olx.in), a global Internet company that offers the next generation of free online classifieds in 50 languages and more than 40 countries. Amarjit joined OLX in 2009, and has played a founding role in the establishment of OLX India as well as the horizontal online classifieds industry in the country. Under Amarjit’s leadership OLX has in a short span of time catapulted to becoming the number one online classifieds player of India and among the most admired brands of the country.
Amarjit has diverse management experience spanning more than two decades of which the last 15 years have been in the Indian Internet space. He joined OLX at a challenging time, when horizontal free online classifieds were unknown in India and people were not open to selling and buying online. Amarjit had the vision to understand the potential of the industry and was among the first to introduce the pioneering concept of online consumer-to-consumer (C2C) marketplace for used goods, an idea that has revolutionized the online classifieds space, and propelled OLX to becoming the largest online C2C marketplace in India. Apart from India, he is also spearheading the company’s growth in other emerging markets of South Asia.
Under his leadership OLX has emerged as the number one C2C marketplace in India, and has won prestigious industry awards and accolades such as India’s only online classifieds to be on the top ten searched terms by Google Zeitgeist 2013 & 2014, two Effie Awards in 2015 for its brand campaigns Womaniya – Phone to Banaao SellPhone, and the TVC campaign featuring Kapil Sharma, two Abby awards at GoaFest 2015, the GSF “Mobile Appies” award for Best Classifieds App in India, Pitch Top 50 Brands in India 2014 and 2015, India’s fifth most trusted online brand by Brand Trust Report 2014 & 2015, and #2 ecommerce website in India by Surewaves Buzziest Brands 2014.
Amar was awarded ‘Marketer of the Year’ (e-commerce) by International Advertising Association (India Chapter) in 2015. In 2014 he was awarded the IDMA Digital Person of the Year. He was also on the 2012 and 2013 ‘IMPACT Digital Power 100’ list, which recognizes the most influential leaders in the Indian digital space. Amarjit holds a Bachelors in Industrial Engineering and has an MBA from University Business School (UBS), Chandigarh. He lives in New Delhi with his wife, daughter, and son. He enjoys sports and an active lifestyle, and spends his spare time playing squash, reading, and listening to music.