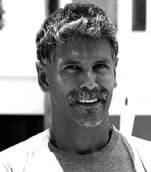 From being a national level swimmer to becoming one of India’s best-known supermodels, Milind Soman has lived a life of spirit and surprise. Never one to shy away from doing controversial ads or movies with a strong message, it became known that Soman has more to him than strapping good looks. In the last decade, he has turned entrepreneur with a chain of gyms and fitness paraphernalia, and has also actively championed social causes and breast cancer support groups. In recent years, Soman became of proponent of “barefoot running” and strongly encouraged the idea amongst runners in India. Always a media darling, nothing could have prepared him for the blitzkrieg that followed his successful completion of the world’s toughest race, the Ironman Challenge in Switzerland earlier this year. Soman completed the 2.4mile swim, 112mile bicycling and 26.2mile running challenge in 15 hours and 9 mins, and his photograph emerging from the chilly waters of the Swiss lake—one that he claims he doesn’t know who took—became the gold standard of fitness for every 50-year-old man in India.