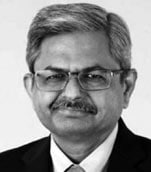 Sanjeev Aggarwal is a co‐founder of Helion and has served on the Boards of Amba Research (Moody's), MakeMyTrip (Nasdaq) and Unitedlex. He is currently on the Boards of IndiaHomes, Azure Power, EyeQ , ShopClues and BigBasket. Prior to Helion, Sanjeev was the Founder and CEO of Daksh, having been with the company from its inception in 2000 to its acquisition by IBM in 2004. Sanjeev ran the company as its CEO till June 2006. Daksh was a pioneer in BPO sector in year 2000 and had over 20,000 employees by June, 2006. During this period, Daksh was rated as the World's Best Managed BPO Company (Black Book of Outsourcing) and was ranked as the #1 employer in Indian BPO market by IDC. Sanjeev was chosen "Ernst & Young Entrepreneur of the year" in 2002. Prior to founding Daksh, he worked for 15 years with leading technology companies serving the domestic Indian market. Sanjeev led the Strategic Initiatives at Motorola India. He worked with Digital Equipment Corporation in delivering technology solutions and was recognized as the "Decathlon Winner", a recognition given to top 1% managers worldwide. He also served as the CEO of 3COM India. Sanjeev has a Bachelor's degree in Electrical Engineering and an MBA.