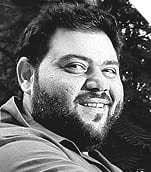 He has more than 30 restaurants and cafés that serve over 12,000 people daily. That's a remarkable feat for someone who sold shoes as a teenager, and has been in the restaurant business for just 12 years. Riyaaz Amlani, who got a Master's in Entertainment Management from the University of California, Los Angeles, co-founded Impresario Entertainment & Hospitality with Kiran Salaskar. Impresario opened Mocha Coffees and Conversations in Churchgate, Mumbai, in 2001 with limited resources and borrowed furniture. Fine dining, cafes and a nightclub followed in Mumbai, Pune, Delhi and Bengaluru. Amlani's his restaurants have been nominated for international honours. At home, he was named 'Best Restaurateur' in the Time Out Food Awards 2011. In 2004, Business Today listed Mocha as one of India's coolest companies. One of Amlani's 18 brand identities, Mocha has launched a bike association, a backpackers' club, a film club, and even a treehugger project. It has won the Times Food Guide Best Coffee Bar award every year.