Apart from making "pre-filled tax returns" available to taxpayers, which will contain details such as salary income, capital gains from securities, bank interests, tax deductions, dividends and the like, Sitharaman proposes to simplify tax laws and enable interchangeability of Aadhaar and PAN Card

In her maiden Budget, Finance Minister Nirmala Sitharaman proposed to implement several measures that will leverage technology to encourage tax compliance and make the process of filing tax returns less cumbersome. To begin with, she said that "pre-filled tax returns" containing details such as salary income, capital gains from securities, bank interests, tax deductions, dividends and the like will be made available to taxpayers.

"Information regarding these incomes will be collected from the concerned sources such as banks, stock exchanges, mutual funds, EPFO, State Registration Departments, etc," said Sitharaman, adding that this will not only significantly reduce the time taken to file an Income Tax Return form (ITR), but will also ensure accuracy of the reported data.

The Modi government has already taken a first step in this direction. Starting this year, the Income Tax Department will provide pre-filled ITR-1 forms that will state your salary, FD interest income, TDS details and tax deductions claimed under Sections 80C to 80U based on your PAN details from Form 26AS, the TDS return filed by your employer and your previous year's ITR. All this data had to be manually filled by the taxpayer till last year. However, this facility is only available for the ITR-1 form filed online, and the other ITR forms have not been covered yet.

For the record, if you are a salaried individual earning less than Rs 50 lakh (income from other sources and one house property are allowed in this case) you can file ITR-1, so long as you are not the director of a company, have not held shares of an unlisted company during the financial year and do not own foreign assets. If your salary income exceeds Rs 50 lakh, you will have to use ITR-2 this year. A self-employed individual will have to file ITR using the ITR-3 or ITR-4 form, depending on the type of income in FY 2018-19. 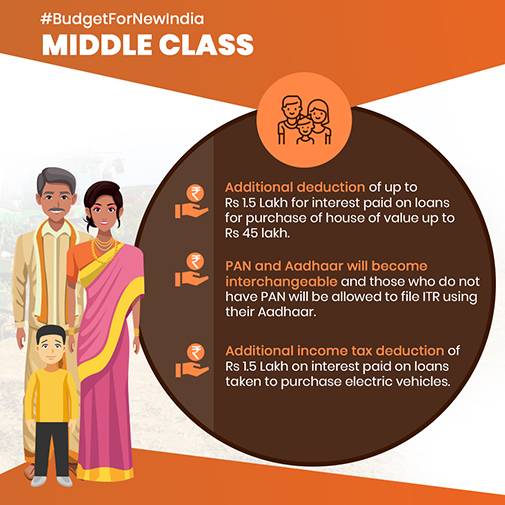 "I also propose to simplify the tax law to reduce genuine hardships being caused to taxpayers which include enhancing threshold of tax for launching prosecution for non-filing of returns and exempting appropriate class of persons from the anti-abuse provisions of Section 50CA and Section 56 of the Income Tax Act," Sitharaman said in her speech.

Budget 2019 also proposed interchangeability of Aadhaar and Permanent Account Number (PAN), allowing taxpayers to cite either one of the above for filing ITRs. The move is aimed at improving tax compliance and ease the process of tax payment since more than 120 crore Indians are currently in the Aadhaar net.

These proposals add to the measures announced in Budget 2018, which will become effective when you file your ITR this year. For instance, only super senior citizens - those aged 80 and above - can file ITR-1 or ITR-4 in paper form. All other taxpayers have to compulsorily file their ITR online via the e-filing website of the IT Department. The Form 16 has also been beefed up. Previously, it used to mention gross salary but not the details of tax-exempt allowances and perquisites. Employers now have to provide a detailed break-up of all components, including remuneration received from former employer/s and all tax-related deductions availed of by the employee. Moreover, taxpayers with overseas earnings and foreign assets will have to provide full details of the same. The aim of these measures is to minimise tax evasion.