BHEL has risen to the occasion to complete, in record time, the overhauling of the 140 MW Gas Turbine Generator Unit- 1 of the Pragati Power Corporation at Indraprastha that was lying crippled at a time when Delhi was reeling under one of its worst power shortages. 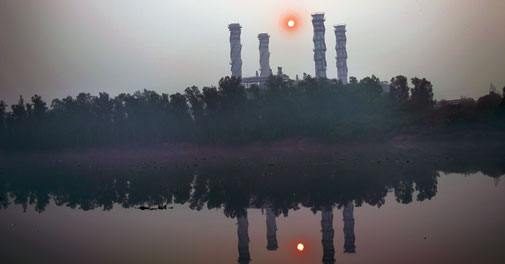 Public Sector giant Bharat Heavy Electricals Limited (BHEL) has risen to the occasion to complete, in record time, the overhauling of the 140 MW Gas Turbine Generator Unit- 1 of the Pragati Power Corporation at Indraprastha that was lying crippled at a time when Delhi was reeling under one of its worst power shortages.

The Ministry of Power had sought BHEL's help in bringing back the unit on a war footing with the Capital being plagued by power outages at the peak of the scorching summer season with temperatures shooting up to a record high.

BHEL chairman B. Prasada Rao said the plant has gone through a major overhaul and started generating electricity again on Thursday.

It is contributing a crucial 140 MW of power in the combined cycle mode to the grid.

The job was taken up by BHEL and BGGTS, a BHEL- GE joint venture company for the generator and gas turbine respectively for this combined cycle plant in Delhi.

As this was a major overhaul job of the unit, it had encountered several unforeseen problems.

Since this particular plant is connected to the city load end, its immediate synchronisation with the grid was critical, he added.

Rao said that in order to meet this challenge, a combined team of BHEL and BGGTS engineers worked round the clock and executed the job through meticulous planning.

The plant was brought to ' Turning Gear' on Monday and then synchronised after a series of electrical and instrumentation test on Wednesday. The unit is now contributing 145 MW of power to the grid in the combined cycle mode.

The power crisis in the Capital and its suburbs had got aggravated due to the thunderstorm that lashed Delhi bringing down the transmission lines in several sections.

Union Power Minister Piyush Goyal had said on Tuesday that it might take up to 15 days to fix the power crisis in Delhi as the grid had become outdated.

The minister after holding a meeting with top officials and Delhi Lt- Governor Najeeb Jung had blamed the previous Congress government which ruled Delhi for 15 years for the ongoing power crisis in the city.

Senior officials said there are sufficient emergency systems in place and Power Grid Corporation of India Limited is also helping restore the infrastructure in the Capital.

OMCs asked to prepare for any supply disruption from Iraq

'Airline industry to invest in new IT initiatives'