News
CORONAVIRUS
2 in 3 people believe in the likelihood of a third wave: LocalCircles

2 in 3 people believe in the likelihood of a third wave: LocalCircles

Over 81 per cent of respondents believe it is critical that the government puts immediate focus on funding and enabling a staffed & dedicated children healthcare.

There has been a 63 per cent increase in four weeks in the number of people who believe a third wave is likely to come in the next three months. Most want the government to address the issue of shortages of primary and community health centres in rural India, found a survey by LocalCircles, a digital community-based platform. Additionally, two in three people believe in the likelihood of a third wave.

About 81 per cent of citizens believe it is critical that government puts immediate focus on funding and enabling a staffed and dedicated children healthcare facility in every district.

LocalCircles conducted a nationwide survey that received more than 37,000 responses from people located in 377 districts of India. Sixty-eight per cent of the respondents were men, while 32 per cent were women.

A similar survey conducted in the first week of December indicated that 38 per cent believed the third wave will come in the next three months. This percentage has increased to 63 per cent. 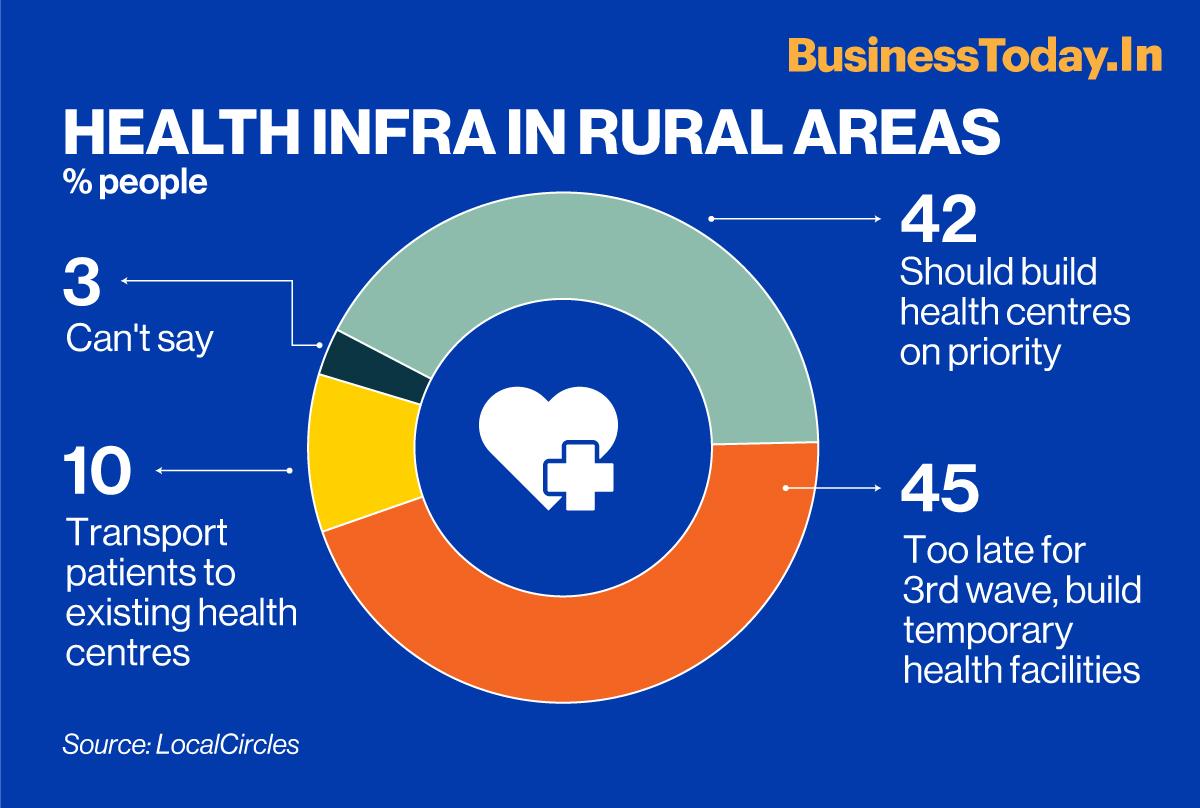 Besides, a recent study by Imperial College London found out that there is "no evidence" that the Omicron is milder than Delta and that the risk of reinfection with this variant is more than five times higher than the latter.

Over 87 per cent of the 8,883 respondents were of the view that government needs to strengthen health infra in rural areas. While 42 per cent said that the government "should build PHCs & CHCs on priority," 45 per cent said it's "too late for the third wave, and the government should start temporary facilities staffed by doctors, nurses instead." There were 10 per cent of the respondents who think that "nothing should be done and instead facilities must be created to transport patients to existing health centres.

"For many villagers, PHCs and CHCs are inaccessible due to shortage and reach such centres, most of which are in a dilapidated condition that rarely opens and are ill-equipped to address even basic illnesses," the LocalCircles survey said.

Further, 79 per cent of the 8,844 respondents want the government to convert panchayat ghars into COVID isolation centres by ensuring the availability of beds and functional toilets in preparation for the third COVID wave. In rural areas, Panchayat Ghar, a building where the Panchayat meets for discussion. Many states used it as a COVID care centre during the second wave. "Given that isolation in village homes is nearly impossible, the government should create a national mission to convert Panchayat Ghars into isolation centres with basic infrastructures like beds and toilets," says the report.

In addition, over 81 per cent of respondents believe it is critical that the government puts immediate focus on funding and enabling a staffed & dedicated children healthcare.

Health experts have stressed the need to have paediatric intensive care unit (PICU) beds at both government and private hospitals, says the report.

About 59 per cent of citizens said, "yes, it is very critical" that government puts immediate focus on funding and enabling a dedicated children healthcare facility. Twenty-three per cent said "yes, somewhat critical" and 11 per cent said, "should not be an area of focus right now, maybe done later".