76 per cent of the people surveyed want crypto ads to be put on hold till there is regulatory clarity over the same.
Manali

As the debate over the cryptocurrency ban hots up in India by the day, over one in two Indians don't want the digital currencies to be legalised in the country but support the Reserve Bank of India's (RBI) to roll out the country's own digital currency, according to a survey by LocalCircles.

76 per cent of the people surveyed want crypto ads to be put on hold till there is regulatory clarity over the same.

It adds that 54 per cent Indians don't want the government to legalise cryptocurrencies but tax them like a digital asset abroad, and 26 per cent say they should be legalised and then taxed in India.

The survey further reveals that 87 per cent of Indian families do not have anyone trading or investing in cryptos, whereas 74 per cent of those surveyed believe cryptocurrency advertisements do not highlight the risks involved in an effective manner. On November 23rd, the Government listed "The Cryptocurrency and Regulation of Official Digital Currency Bill 2021" to be presented in the Parliament's Winter Session, seeking to prohibit all private cryptocurrencies trading in India while allowing certain exceptions to promote the underlying technology of cryptocurrencies and its uses.

However, RBI Governor Shaktikanta Das has raised doubt that the number of crypto users in India is exaggerated. He stated that roughly 70-80 per cent of users only have small balances of Rs 500-1000.

Das also cautioned against the use of cryptocurrency, highlighting the risk it poses to macroeconomic and financial stability.

The Securities and Exchange Board of India (SEBI) has also voiced its concern about the unregulated growth of cryptocurrencies in India, keeping vulnerable retailers and investors in mind.

A meeting chaired by PM Modi early last week discussed the future of cryptocurrency amid concerns that it can be used as an avenue for money laundering and financing terror.

Also Read: Govt to move Bill to ban all private cryptocurrencies; check out reactions from the industry

Further, a memo outlining the summary of the meeting showed the government's displeasure over misleading advertisements by the crypto industry promising large profits. Following this, multiple crypto players have decided to halt new advertisements till regulations are set.

In addition to the RBI and the government, "activists and many citizens have also raised concerns on LocalCircles about crypto platforms targeting youngsters through misleading advertisements, promising high returns and highlighting how quickly upper and upper-middle classes have gotten into trading in cryptocurrencies in the last 18 months as well as a serious risk of middle- and lower-income classes getting lured into it."

Basis all these developments and strong citizen interest lately, LocalCircles conducted an extensive study over the last 15 days to understand the level of trust Indians have in cryptocurrencies.

It also sought to understand citizens' pulse about how the government should handle cryptocurrencies from a regulatory standpoint.

Taking cognisance of the fact that there is no regulation to guide cryptocurrency in India, the study tried to find out if India should roll out its own digital currency, which is managed by the RBI. 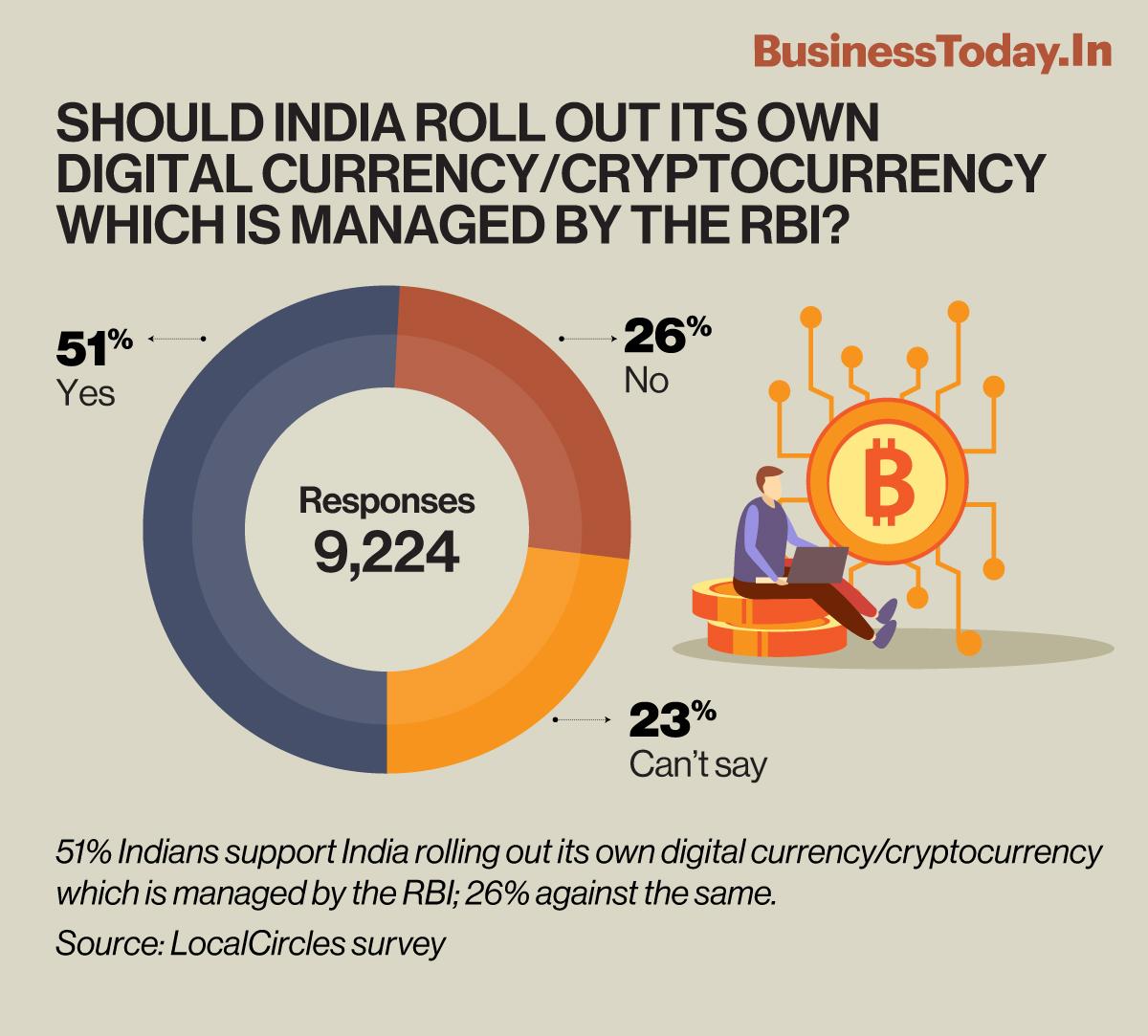 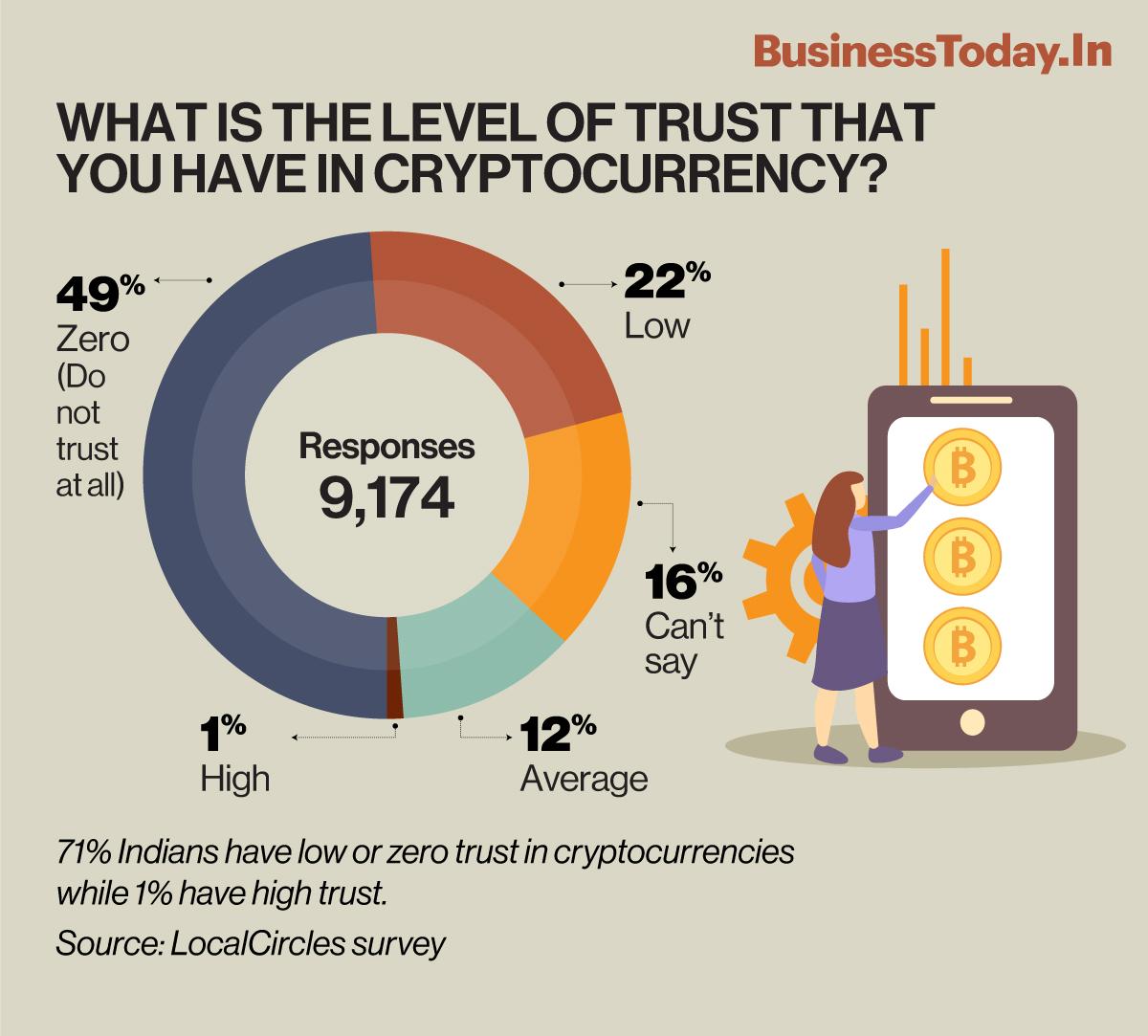 As per reports about the meeting chaired by Prime Minister in mid-November, it was discussed how misleading advertisements are luring many young investors in an unregulated space.

Also Read: What happens if the government decides to ban cryptocurrency?

While the profits are highlighted on all platforms and even endorsed by celebrities, the losses barely make the news. Recently, investors lost millions of dollars in a scam related to Squid coin, created by an anonymous developer.

The coin hit a market value of $30 million before the developers shut it down, causing the value of the coin to plummet to zero.

Taking cognisance of such issues, the first question in the study asked citizens about the level of trust they currently have in cryptocurrencies.

The survey further found that 16 per cent of respondents did not have an opinion. On an aggregate basis, 71 per cent of Indians studied have low or zero trust in cryptocurrencies while 1 per cent have high trust. This question in the study received 9,174 responses.