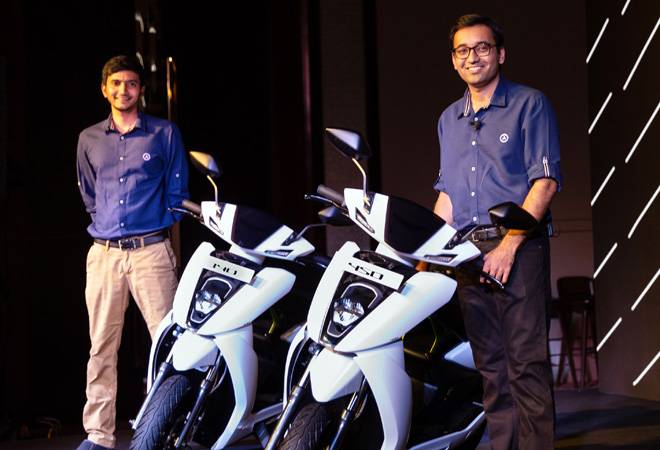 Five-year-old electric vehicle start-up Ather Energy, which is backed by country's largest two-wheeler maker Hero MotoCorp and e-commerce giant Flipkart's founders Sachin and Binny Bansal, on Tuesday launched its first two electric scooters in Bangalore at Rs 1.09-1.24 lakh. For now, the scooters will be available only in Bangalore but the company has plans to launch it in Pune and Chennai in the next phase.

The two scooters Ather 340 and Ather 450 are being billed as two of India's fastest scooters available till date. They betray the traditional image of an electric two-wheeler in the country, of low performance with uninspiring styling and riddled with reliability issues. The Ather 340 at Rs 109,750 and Ather 450 at Rs 124,750, are on road prices in Bangalore inclusive of subsidy of Rs. 22,000, GST, road tax, smart card fee, registration card, and insurance.

"We started building electric scooters four years ago at IIT Madras and we are super excited to launch not only the Ather340, but also our higher performance flagship variant, the Ather 450. It has been designed with quick acceleration, great handling, high storage space and new-to-category features like park assist, remote diagnostics, and onboard navigation," said Tarun Mehta, co-founder and CEO, Ather Energy.

"In the last 4 years we have not only built the scooter, but an ecosystem for an electric vehicle future. Be it the suppliers and partners who were entering the EV market, the charging infrastructure that had to be set up for consumers and the engineering talent itself to build the products. Between the Ather 450 & Ather 340 launching and AtherGrid being up and running in Bengaluru, we are really looking forward to expanding into Chennai and Pune in the coming months. These are exciting times to be a part of the industry," he added.

On top of the price, the company is offering a monthly subscription that takes care of most of the scooter's operational expenses. The Ather One plan entitles customers to free public and home charging, periodic maintenance inclusive of consumables, breakdown assistance and unlimited data services for the dashboard at only Rs. 700 + GST per month. For the first set of consumers, the plan is complimentary for the first year. The company will also provide a home charging point with the Ather 450 and a charging cable with the Ather 340. The price of these products and their installation will be waived off for these consumers.

Penetration of electric two-wheelers in India, the biggest market for conventional two-wheelers in the world, has been low on account of inconsistent policy on fiscal incentives, lack of charging network and perceived poor performance of the vehicles vis a vis gasoline driven two-wheelers. The company, however,  claims its flagship Ather 450 has been designed to solve some of the problems like slow charging speeds, low powered motors, and short battery lives that have limited current electric two-wheelers. It can fast charge to 80 per cent at a rate of 1 km/minute and comes with a 3.3kW BLDC motor that can comfortably ride up 18-degree slopes, making steep parking lots, flyovers, and roads an easy climb. It also comes with parking assist, which allows riders to reverse into tight parking locations.

Further, it has a 7" touch-screen dashboard that allows onboard navigation with options of alternative routes and saved locations. It comes with the Ather app that enables push navigation from the phone to the vehicle dashboard, remote monitoring of the vehicle health, charge monitoring and managing service requirements.

Like most other start-ups in India, the company was founded by two IIT graduates Tarun Mehta and Swapnil Jain in 2013. The company had first showcased the prototype of the S340 that was launched today, back in February 2016 and had planned to start selling it by the end of the year. However, the plans could not fructify in time as the company struggled with lack of technical know-how with parts vendors in the country not used to supplying components for an electric vehicle. Tuesday's launch marks a delay of over a year.