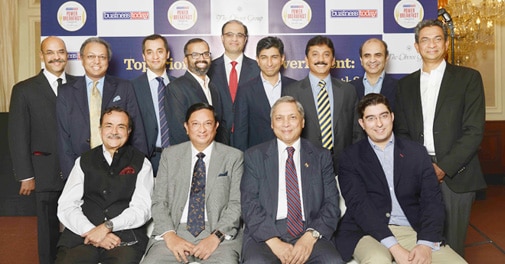 "The inflation versus growth debate is a little narrow. Inflation is bad because it hurts savings, irrespective of what the level of inflation is. There are many ways to curb inflation. For instance, a lot of our inflation is food-driven. If the minimum procurement price of foodgrains is changed, it will curb inflation. Inflation is a political problem in India. It's not just an economic problem," said Gaurav Dalmia, Chairman of Landmark Holdings.

Dalmia was speaking at the first in a multi-city series of Business Today's Power Breakfast this year, held in association with The Oberoi Group at The Oberoi hotel on May 6.

Most participants agreed that the periodic increases in interest rates by the Reserve Bank of India (RBI) had curbed industrial activity, slowing down such sectors as infrastructure, mining and power. Ratul Puri, Chairman, Hindustan Powerprojects, said: "We need to go out and aggressively reduce interest rates to kickstart the economy. Also, we need to raise power tariffs. People are willing to pay for power."

Feedback Infra Chairman Vinayak Chatterjee said industry was sitting on unutilised capacity and the new government needed to reduce interest rates gradually. "Power and Railways need reforms [and these] should be prioritised," he added.

There were differences too, as the discussion proceeded. Jagdish Khattar, Managing Director, Carnation Auto India, and Google India Managing Director Rajan Anandan had divergent views on automation in manufacturing. While Khattar maintained there would always be a role for humans on the factory shop floor, Anandan was emphatic that in 20 years, robots would do all that industrial workers do today. "Most manufacturing will not require people in the next 25 years. We should be thoughtful about where we are headed. We have to be careful because manufacturing will employ robots and 3D printing," Anandan added.

Many sectors were touched upon in the course of the conversation. Tourism was still an under-leveraged industry in India, said Kapil Chopra, President of The Oberoi Group. "Thailand gets 25 million tourists; India gets five million. We need visa on arrival," he added.

Ravi Uppal, Managing Director and Group CEO of Jindal Steel & Power, noted that the three 'Ms' - manufacturing, mining and metals - were investment intensive. "Private sector is not willing to invest because its confidence is shattered," he said. He felt India should have a common ministry for power, energy and natural gas.

Siraj A. Chaudhry, Chairman of Cargill India, said the food processing industry was not capital intensive. But its challenge lay in distribution, and there was a need for big retail outlets. "The country has large stocks of cereals. Farmers need to be encouraged to move away from cereals. We need private sector investment in supply chains and food processing. Nutritious food has to be produced better and distributed better," he said.

Some panellists talked about job creation as well. Vivek Nath, Managing Director, Towers Watson India, said: "We need to create the right jobs. Shift jobs out of the informal sector. Skilling is another issue for job creation." Providing job creation-linked incentives could help, he added.

Towards the end of the discussion, some panellists shared their wish list for the new government. Khattar said confidence needed to be increased. "We also need independent regulators," he added.

"Open up the country to foreign tourists," said Chopra of The Oberoi Group. Nikhil Sawhney, Vice Chairman and Managing Director of Triveni Turbine, said that the government needed to trust the private sector. Ajay Chandra, Managing Director, Unitech, also participated in the discussion.

Amit Goenka - the man to watch