Indian companies have a vast amount of money locked in disputed taxes, going by the numbers in the Centre for Monitoring Indian Economy (CMIE) database.

Indian companies have a vast amount of money locked in disputed taxes , going by the numbers in the Centre for Monitoring Indian Economy (CMIE) database.

In financial year 2011/12, the 30 companies that make up the Bombay Stock Exchange Sensex saw money locked in disputed taxes rise 27 per cent to Rs 42,388 crore. A year earlier, that figure amounted to Rs 33,393 crore, according to the database.

The resolution of these cases would unlock around Rs 1.2 trillion (as of 2011/12), going by the CMIE data. If that money was freed it would have a huge impact on the economy.

Schedule VI of the Companies Act, 1956, requires all listed companies to disclose disputed tax liabilities as part of their contingent liabilities. This does not impact their bottom line as the numbers are disclosed in the Annual Report as part of the 'Notes to Accounts'. 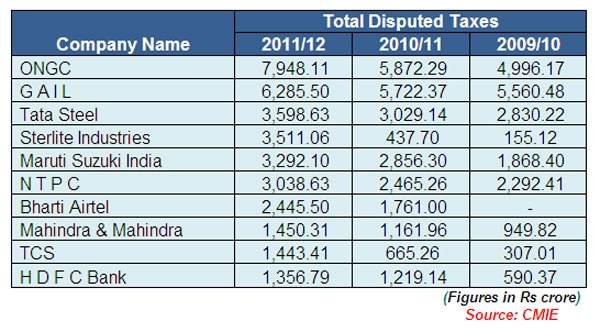 The major portion of private companies' disputed taxes comprises income taxes. Among the PSUs, it is disputed sales taxes.

However, state-owned ONGC also tops the list for disputed income tax, with Rs 1,770 crore stuck. Bharti Airtel is next in line with Rs 1,422 crore of income tax disputes in 2011/12 compared to the previous financial year. TCS, HDFC Bank and Reliance Industries were the others in the top five.