DHFL promoters pledge their entire stake in the September quarter Beleaguered mortgage lender Dewan Housing Finance Corporation (DHFL) is the only company in the BSE-500 index that has seen its entire promoter stake being pledged in the September quarter of the financial year 2019-20 (FY20). Data available with AceEquity showed that promoters' shares in DHFL were last pledged in the December quarter of FY12.

In the December quarter of FY19, CG Power & Industrial Solutions was the only firm among BSE-500 companies whose promoter stake was pledged at 100 per cent. An analysis of BSE-500 stocks showed that eight companies had more than 90 per cent of their promoter holdings pledged in Q2FY20. The number stood at four in the June quarter. An analysis of pledged holdings of BSE-500 stocks by Kotak Institutional Equities shows that the percentage of pledged promoter holdings increased to 2.52 per cent in the September quarter from 2.47 per cent in the June quarter. This has come down nearly 60 basis points since September quarter of 2017. "Outstanding promoters pledged shares were Rs 1.73 lakh crore, which is about 1.24 per cent of the total BSE-500 Index's market capitalisation at end-September 2019," the brokerage firm said in a report. 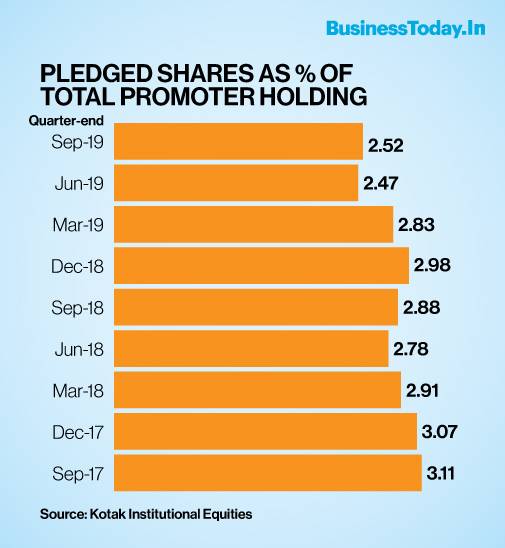 Promoters of 113 companies pledged their holdings in the Q2FY20. This is a marginal increase from 110 in the previous quarter. The market regulator Sebi had recently revised disclosure norms for pledged shares to include all direct and indirect pledges of promoters versus only direct pledges earlier, following which 42 companies saw an increase in their pledged promoter holdings between the first two-quarters of FY20.

Significant increase in pledged promoter holdings between a range of 70-100 per cent during the last two quarters include companies such as DHFL, DCM Shriram and Future Lifestyle Fashions. Pledging of shares does not necessarily indicate the financial stress of a company or a promoter. 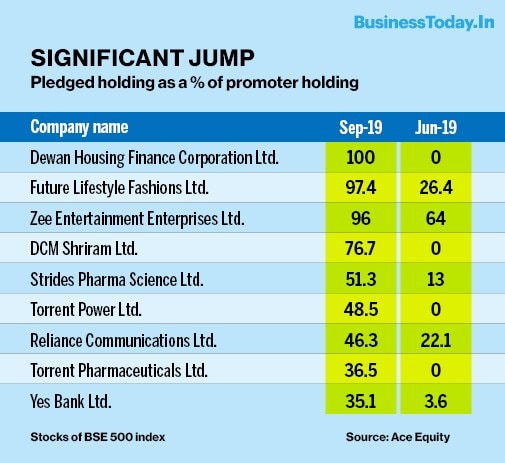 Close to 35 companies saw a decline in pledged promoter holdings. These include JK Tyre & Industries, Centrum Capital, Infibeam, Gateway Distriparks and Swan Energy. Among these, the promoters of JK Tyre & Industries and Triveni Turbine revoked the entire quantum of pledged shares in the second quarter of FY20. 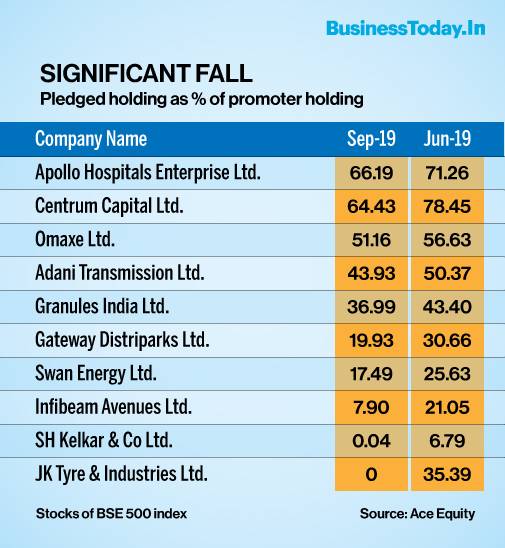