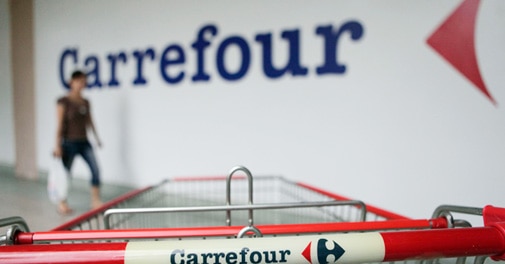 Carrefour, since its entry in 2010, was not able to find a partner to expand its business beyond five stores. Photo: Reuters

A day after world's second-largest retailer Carrefour SA said that it will exit India by September end after shutting its cash-and-carry stores, RPG Enterprises Chairman Harsh Goenka tweeted that "the French can never understand India".

However, analysts say that too much should not be read into the company's exit from India.

He said the issue has nothing to do with the scope of the sector in the country and it is not a failure of government policy. The other global players in the sector are Germany's Metro, American chain Wal-Mart and local players such as RIL's Reliance Market.

Carrefour, since its entry in 2010, was not able to find a partner to expand its business beyond five stores.

"It has had a difficult time engaging with India over the last seven to eight years and could develop only a small cash-and-carry footprint without a partner," says Devangshu Dutta, Chief Executive, Third Eyesight. "We can debate on whether it was because they could not find any Indian partner whose motivations and profile matched Carrefour's requirements or whether it was the operating conditions that it found difficult," he says.

Singhal adds the retailer, which operates more than 10,000 stores in 30-plus countries, has exited from several other countries in recent years, much like its peers Tesco and Wal-Mart. The French firm had moved out of markets such as Singapore, Greece and Malaysia.

The cash-and-carry, or the wholesale business in India is not easy to operate. Add to that the rules on local sourcing and state-wise restrictions on the operations, companies such as Carrefour are likely to struggle.

"It is important to remember that unlike Metro or even Wal-Mart, cash-and-carry is a very small part of the business for Carrefour globally," says Dutta. "Carrefour may have felt that it was 'logical' to disengage from India and instead focus on their other larger markets such as Europe since there are significant management challenges even in those geographies," says Dutta.

Terms to know before FM reads his July 10 speech