The Chennai-headquartered Magzter founded by Girish Ramdas and Vijayakumar Radhakrishnan has come a long way, but the segment in which Magzter operates is still nascent. And Ramdas has an ambitious plan to grow much bigger. 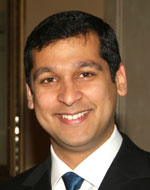 Girish Ramdas
In the two and a half years since it was created, Magzter, an application which offers a collection of more than 3,500 magazines over tablets and smartphones, has hit 18 million downloads. It is already the world's largest digital magazine store, with 750,000 downloads every month, leaving behind Zinio, another similar application which has had eight million downloads.

The Chennai-headquartered Magzter founded by Girish Ramdas and Vijayakumar Radhakrishnan, has come a long way, but the segment in which Magzter operates is still nascent. And Ramdas has an ambitious plan to grow much bigger.

Most Internet companies, listed or not, are driven by valuation. Ramdas wants Magzter to be valued at $1 billion. Isn't that low when Whatspp was bought by Facebook at $19 billion? "Whatsapp and Pinterest were dream companies, they were not making money. There is no tangible way to measure (their worth)," says Ramdas. In the case of Magzter, everything is tangible, and the company is already making money.

Are Ramdas and his co-founder planning to ultimately sell the company? "It's early and we are not looking to sell immediately, but at the right price, who knows? After all we are a venture-capital funded company," says Ramdas.

In December last year, Magzter raised $10 million from Singapore Press Holdings and former investor Kalaari Capital, as series-B funding. The first round of an amount of $3 million was from Kalaari Capital. The fresh funds, Ramdas says, will be used to get into parts of the world it has not ventured so far, such as the other BRIC nations, where it needs to establish a local presence, without which publishers won't come on board. The company is already aggregating content from 50 countries.

Ramdas and Radhakrishnan had a humble start. Initially, there was no intention of building Magzter. Magzter evolved out of the business they were into - IT and an online portal.

In Chennai, in the late 1990s, Ramdas owned an IT company, Dot Com Infoway. In 2000, he launched his first Internet portal called Galatta.com which offered movies in the southern languages. In 2008/09, when Apple launched the iPhone, one of its evangelists happened to come to Bangalore to talk about apps. Radhakrishnan, who was then Dot Com Infoway's Chief Technology Officer, went to meet the evangelist - came back convinced that apps were the future.

So Infoway started making applications. It created the IPL app in 2010 and the A.R. Rehman musical app for Sony Music. By then Galatta cinema magazine was launched which was later digitised into a magazine app. A few of the local publishers liked it and requested Ramdas to build a similar application. Ramdas decided to make a master app which many publishers would be able to use.

Ramdas and Radhakrishnan used the IT team of Infoway to build a back-end connection to an Amazon server, where users could create an account, and directly upload their magazine using the Magzter's dashboard. "Within 60 minutes (of uploading) the magazine will be available across all platforms - iOS, Android, Windows, etc," says Ramdas. "Everything is automated at the backend." About 30 people from Infoway have been completely shifted to manage Magzter's backend. It took 18 months to build the platform.

Of the 18 million downloads, Magzter has 2 million unique users.

Magzter's revenue comes through a subscription model. It charges between 35 per cent and 45 per cent of the subscription amount of the magazines it hosts. But Ramdas does not see that as the revenue generation stream ahead.

In the next two years, Ramdas says, subscription will only be 30 per cent of Magzter's revenue. "The rest will from digital and experiential advertising," he says. This will be a mix of video and interactive advertisement in between magazines. The Rolex advertisement on Forbes magazine, for example, comes with a host of interactive features - the watch shows real time, the stop watch can be operated and there is a video embedded too.

The template was developed by Magzter and given to Rolex. Many such templates are being developed by the company to be given to various companies. German premium car maker BMW is already one of them.

Digital advertising is expected to become a $8.3 billion industry by 2016, according to audit and consultancy firm PwC. Ramdas says, he wants a large share of this market. "That's the first target."

The second target is to have more and more readers on the digital platform, shifting from print. Print, at present, is $150 billion industry globally. "That's the next big thing," says Ramdas. And once that happens, Ramdas wants Magzter to evolve from magazine hosting to a book, magazine and newsstand company - intending to become a "one-stop destination" for readers.

Magazines are the not the first to go through this revolution. In the past, music got digitised with Apple's iTunes, movies with Netflix, books when Amazon, Nook and Kobo came out with ebook readers. Magazines have just started.

Ramdas agrees that Internet's big giants like Facebook, Google and Amazon want to have their hands in every segment. "It's about a converged world," he says, especially after after Facebook's acquisition of Whatsapp. It seems unlikely that that Magzter will take long to get to the billion dollar mark.