Cumulative financial performance of BSE-500 companies (excluding oil and BFSI), a broad representation of the market covering all major industries, sent worrying signals when analysed for the June and September quarters of FY20 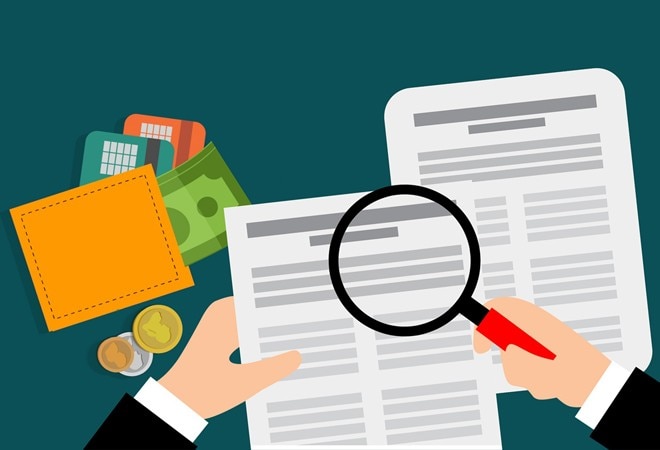 Mirroring the slowdown in the economy, the corporate earnings for the first six months of the current fiscal reflected its worst performance in almost a decade. Cumulative financial performance of BSE-500 companies (excluding oil and BFSI), a broad representation of the market covering all major industries, sent worrying signals when analysed for the June and September quarters of 2019/20. The revenue growth declined for the first time and profits contracted the maximum since 2011.

The net sales of the sample declined marginally by (-) 0.01 per cent in HIFY20 compared to a double-digit year-on-year growth of 14.4 per cent. Going by this yardstick, the topline grew over 10 per cent in only two other financial years - FY15 and FY12.

Operating profits shrunk over 17 percentage points to 1.5 per cent in H1FY20 from 19.3 per cent in H1FY19 but with flattish sales, operating margins inched up to 23 per cent from 22.6 per cent, respectively.

The bottomline numbers were more disappointing, declining sharply by 52.4 per cent. In the corresponding period last year, it delivered a strong show of around 14 per cent. Half-yearly profits of these companies have declined five times in past nine years with alternate years of growth. 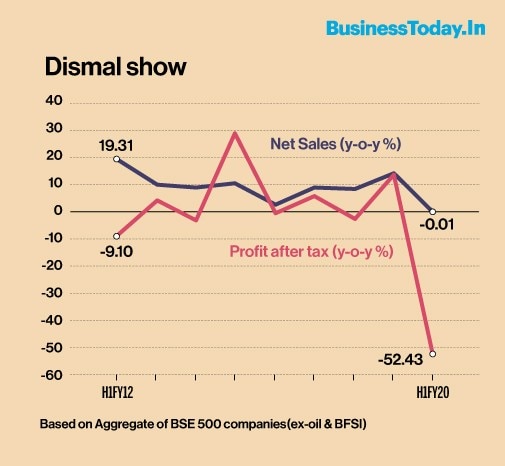 This dismal show weighted down the margins too as the net profit margin almost halved from 9.5 per cent in H1FY19 to 4.5 per cent for the first six months of FY20.

Rising cost heads need to be blamed for such a dull first half with a twin play of interest and employee expenses. Interest expenses as a percentage of net sales inched up 64 basis points during the first six-months of the FY19 and FY20 and almost doubled since H1FY13. Employee cost as percentage of net sales, which was at 10 per cent, has grown marginally from 9.4 per cent in H1FY19, but this was 2 percentage points higher than the corresponding period of FY13. Raw material cost, the major cost head of these companies, however, declined 2 percentage points between H1FY19 and H1FY20. 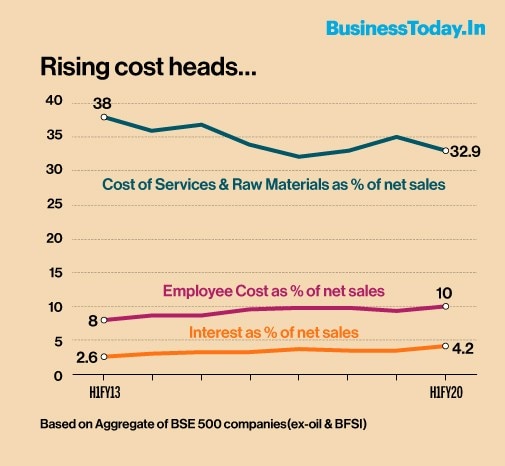 Adding crude oil companies to the sample made the matter worst with revenues falling around 3 per cent in H1FY20 while decline in profit after tax was restricted to 41.4 per cent. Aggregate net sales of crude oil companies have declined 7.5 per cent during the period. However, adding both banking and financial services companies to the universe brought in marginal relief as sales grew 0.5 per cent and operating profits went up 3 per cent even as profits declined 23.3 per cent. Revenues of financial services sector has expanded by 9 per cent year-on-year in the first half of this fiscal and aggregate profits more than doubled, during this period.