Several advisers say they are concerned that optimistic estimates and already sky-high prices implied by privately sold stakes could pose a threat to IPOs of these firms. 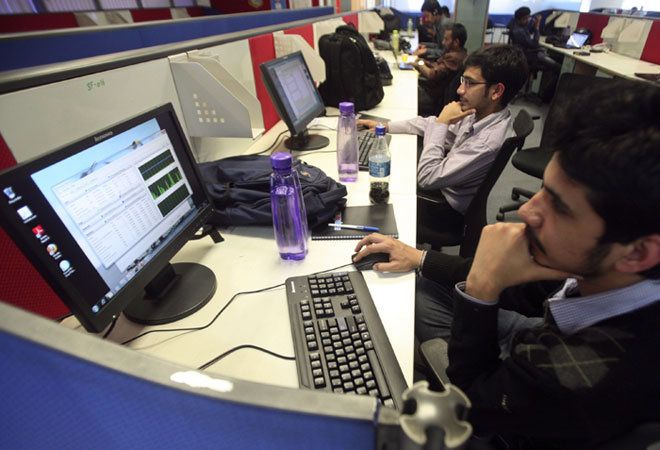 Snapdeal CEO Kunal Bahl said his company is currently valued at slightly over US $5 billion. (A Snapdeal office is pictured here. Photo: Reuters)

As billions of dollars flow into the country's booming online economy, some investors are beginning to fret that soaring valuations could hamper stock market listings of e-commerce start-ups and limit their options when it comes to turning paper profits into cash.

The rising number of smartphone users domestically, cheaper internet costs and a vast middle class have turned e-commerce into one of the hottest markets for investors such as Singaporean wealth fund Temasek Holdings, venture capitalists Accel Partners and Japan's SoftBank Corp.

"Public markets will have a completely different perception to the excitement in the private market," said a banker with a homegrown firm, which advises investors in the online sector.

"Investors are now taking a pause and asking if these valuations will stand the scrutiny of stock markets," the banker said.

Investors have pumped US $4.5 billion into the domestic internet space in the 13 months to February, with online marketplaces Flipkart and Snapdeal getting almost 60 per cent of the funding since 2007, according to Morgan Stanley.

Analysts value Flipkart, the country's biggest e-commerce firm, at around US $11 billion. That would amount to roughly three times estimates of their gross merchandise volume (GMV), or the value of goods they sell. Snapdeal CEO Kunal Bahl said his company is currently valued at slightly over US $5 billion and is expected to end the financial year with US $3 billion in GMVs.

By comparison, e-commerce veteran Ebay trades at roughly equal to its GMV, according to its website. Flipkart did not respond to an email and call seeking comment.

Three of the leading brick-and-mortar retailers in the country - Future Retail, Shoppers Stop and Pantaloons Fashion and Retail - only manage a combined valuation of less than US $1.5 billion, according to Reuters Data.

"If you are a late-stage investor, then the exit and return risks become higher... The risks are always on exits," Lahiri added.

PE firms typically exit investments via IPOs, and most of the local companies look to overseas markets, mainly NASDAQ OMX Group, where a greater number of comparable firms trade.

Capital market regulator Securities and Exchange Board of India (Sebi) is also looking to make it easier for them to list on domestic bourses.

About half a dozen online companies are in talks to raise fresh funds, and reports of negotiations surface in local media daily. Softbank in October said it would invest US $10 billion in the domestic e-commerce space.

"There is a fear (among investors) of missing out, which is partly driving up valuations," said Amit Patni, co-founder of Nirvana Venture Advisors, which invests in early-stage firms.

Several bankers, angel investors and PE firms also said they were worried about the rate at which some of these firms were burning cash.

Executives at private equity firms who have invested in e-commerce said that while there was no immediate pressure on companies to turn a profit, conversations had turned to better margins.

Heavy investments by home-grown online retailers to lure buyers away from traditional channels mean it will be a while before they become profitable, as was the case with older overseas peers such as Amazon.com.

The combined losses faced by e-commerce companies as a result of discounting strategies is almost Rs 1,000 crore ($160 million), according to consultant PricewaterhouseCoopers (PwC). None of them make a profit.

The country's online start-ups spend as much as Rs 1,700 ($27) to gain a new customer, according to analyst estimates.