The company, which currently has two manufacturing plants at Greater Noida and Tapukara, is also looking to start a second shift at the Tapukara facility. 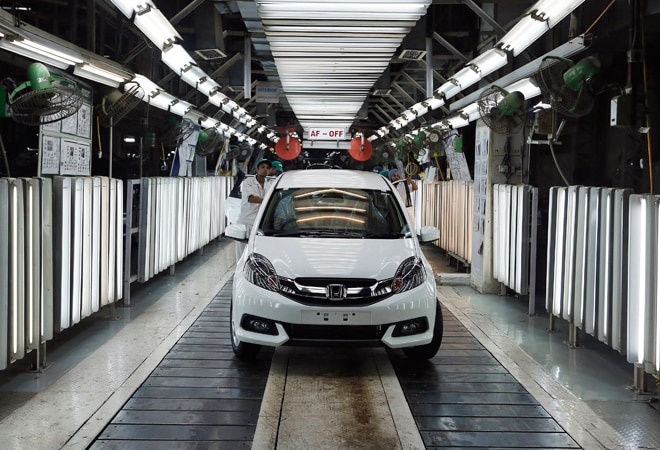 A Honda Mobilio car is pictured at the production line at a Honda plant in Greater Noida (Photo: Reuters)

Honda Cars India has initiated the process to acquire land in Gujarat to come up with its third manufacturing plant in the country.

The auto company, which currently has two manufacturing plants at Greater Noida and Tapukara, is also looking to start a second shift at the Tapukara facility.

"First step for us is to start the second shift at Tapukara which we have started planning and we shall be up and running with the second shift by November," Honda Cars India Ltd (HCIL) Senior Vice President (Marketing and Sales) Jnaneswar Sen told reporters on the sidelines of the annual SIAM convention.

"In addition to that, we have just started the process to acquire land in Gujarat for the long term purposes given our commitment to the Indian market," he added.

He, however, declined to provide further details.

A subsidiary of Japan's Honda, the company's current installed manufacturing capacity stands at 2.4 lakh units across its two manufacturing plants.

The Tapukara plant, which rolls out sedans Amaze and City, currently has a production capacity of 60,000 units on a single shift basis.

"The Tapukara plant is spread over 450 acres while the Greater Noida plant has an area of 150 acres, so we have a lot of scope to expand in Tapukara," Sen said.

The addition in production capacity at the Tapukara plant would help the company reduce waiting periods on cars City and Amaze, he added.

Asked about the new product launches, Sen said, "We are keen on new generation Accord and intend to launch it here in the next financial year".

The company also intends to launch new Jazz in 2015, he added.

Commenting on the upcoming festival season, Sen said the company expected the period to be better than the last year.