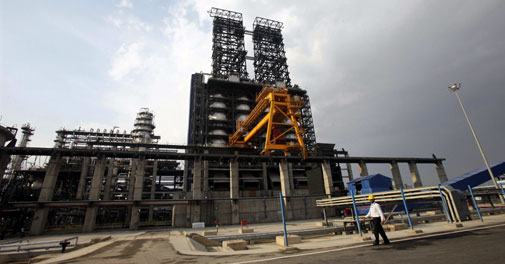 Retailers like HPCL sell diesel and cooking fuel at rates way below cost. Roughly half of these losses are compensated by the government by way of cash subsidy. Upstream oil and gas producers like ONGC make up for another 48 per cent.

The company lost Rs 9,183 crore on selling diesel, domestic LPG and Kerosene at government controlled rates in Q4. Against this, it got Rs 5,671 crore assistance from the upstream firms and Rs 6,938 crore in cash subsidy from the government.

The cash subsidy was to cover for losses HPCL had incurred in previous quarters as well, HPCL Director (Finance) K V Rao said.

In the full year, the company got Rs 15,215 crore in cash subsidy and Rs 16,771 crore in assistance from upstream firms, leaving Rs 482 crore uncovered loss.

He said the company earned USD 4.66 on turning every barrel of crude oil into fuel as compared to $3.71 a barrel gross refining margin (GRM).

The increase was mainly due to increased refining and marketing margins.

"The sales of petroleum products in the domestic market were at an all time high of 30.26 million tonnes during the year, registering an increase of 4.1 per cent over the previous year, as against the industry growth rate of 1.3 per cent," Vasudeva said.

The refineries at Mumbai and Visakh processed 15.51 million tonnes of crude during the year. The combined GRM during the year was $3.43/bbl, as against $2.08/bbl in the previous year.