In the customary pre-Budget discussion with the finance minister, industry also demanded increase in public spending in the infrastructure sector. 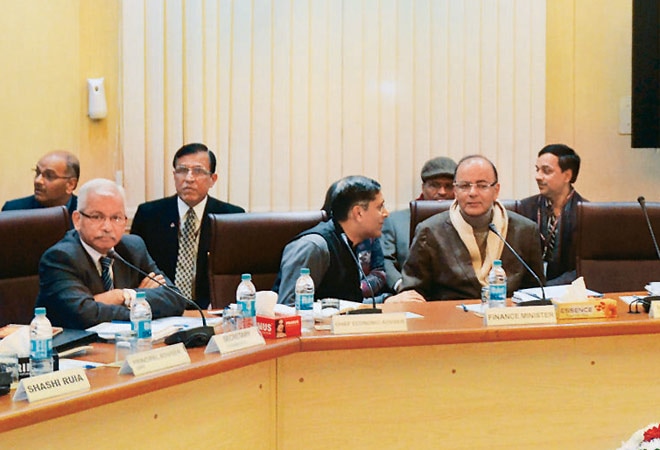 Union finance minister Arun Jaitley during a pre-Budget discussion with industry and trade groups in New Delhi on Tuesday.

In the customary pre-Budget discussion with the finance minister, industry demanded increase in public spending in the infrastructure sector and expediting the reform process to promote the 'Make in India' campaign. Jaitely in turn promised to take steps to improve ease of doing business for promoting manufacturing.

Jaitley also said that implementation of goods and services tax is expected to improve the tax administration regime and would help in bringing more transparency in the system and ensure smooth flow of goods. The government is expected to take a call on introducing the stringent GAAR provisions in the Budget. As an addition to the Income Tax Act, GAAR aims to reduce tax avoidance by empowering countries to deny tax treaty benefits to companies that merely seek to route investment through Mauritius and other tax havens to evade taxes.

Foreign companies and investors have routed investment into India through Mauritius-based holding companies to take advantage of the island-nation's favourable corporate tax regime and lack of withholding and capital gains taxes. Industry fears that the stringent provisions may hit genuine investments routed through these jurisdictions merely for the ease of doing business.

According to an official statement, it was suggested to the industry representatives that all major subsidies be made available to only below-poverty-line households, create a fuel price stabilisation fund to check volatility in fuel prices and implement PSU disinvestment systematically.

PepsiCo gets CCI nod for selling bottling plants to franchisee