"We are hoping for a 50-basis points cut in the repo rate as retail inflation has started receding," Confederation of India Industry director general Chandrajit Banerjee said. 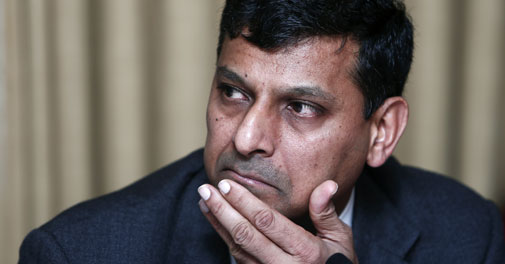 India Inc wants the Reserve Bank of India (RBI) to cut the key interest rate in its monetary policy review on April 1 as slowing inflation and a more stable rupee provide some headroom to rev up the sluggish economy.

The annual rate of inflation, based on the monthly wholesale price index, stood at 4.68 per cent in February. Retail inflation was at a 25-month low of 8.1 per cent last month.

"We are hoping for a 50-basis points cut in the repo rate as retail inflation has started receding," Confederation of India Industry (CII) Director General Chandrajit Banerjee said.

Bankers, however, expect RBI to leave interest rates untouched as it is still keeping a close watch on inflation.

In its third quarter review of monetary policy in January, the central bank had raised the key repo rate by 0.25 per cent to 8 per cent in a bid to curb inflation. Rajan had said the increase was needed to set the economy securely on a disinflationary path.

The RBI governor has raised the interest rate three times since he took charge in September.