Speaking to reporters, chief executive officer and managing director Vishal Sikka said: "It is an aspirational goal. We use that to organize our thoughts. I believe we can get there." 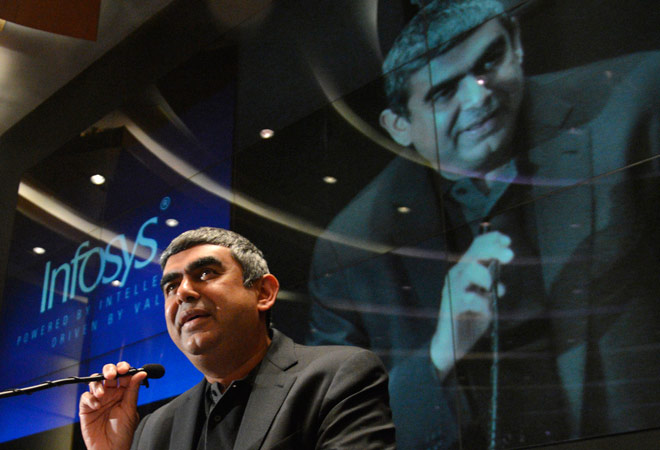 Information technology bellwether Infosys is targeting to become a $20 billion revenue company by 2020 with an average revenue per employee at $80,000, said a top company official near Chennai on Friday.

Speaking to reporters, chief executive officer and managing director Vishal Sikka said: "It is an aspirational goal. We use that to organize our thoughts. I believe we can get there."

According to him, the goal would be achieved by a mix of organic and inorganic growth.

Queried about how realistic was the goal of average revenue per employee growing up to $80,000 from the current $50,000, he said many of the routine works would be automated and more number of employees would be deployed in such work that would fetch higher revenue.

He said an additional head count of 70,000 would be added to the company rolls in the process towards achieving the five-year goal.

Queried about the fourth quarter and the annual results for 2014-15, Sikka said his philosophy is not to worry about transient things like quarterly growth but to look at annual numbers.

Infosys reported net profit of Rs 3,097 crore for the fourth quarter of fiscal 2014-15 with a 3.5 per cent growth over the corresponding period the previous year.

The company posted a revenue of Rs 13,411 crore for the period under review, up by 4.2 per cent over the previous year.

According to Infosys, the revenues are expected to grow 8.4-10.4 per cent in Indian rupee terms.

For the full year, the company posted a consolidated revenue of Rs.53,319 crore, logging an year-on-year growth of 6.4 per cent.

The company has given a guidance of 10-12 per cent growth in constant currency terms for the current fiscal.

The company also announced a definitive agreement to acquire around 500 employees Kallidus Inc, and its affiliate, a leading provider of digital experience solutions, including mobile commerce and in-store shopping experiences to large retail clients.

Infosys also said it has entered into an agreement for an early state investment of $2 million in Airviz to acquire minority stake.

Infosys recently completed the acquisition of Panaya, a provider of automation technology.

The company board that met near here on Friday recommended a bonus issue of one equity share for every equity share held and a stock dividend of one American Depositary Share (ADS) for every ADS held as on a record date to be determined.

The board decided to hike the dividend pay-out ratio to up to 50 percent of post tax profits effective from fiscal 2015 -- from 40 percent.

During the year, the gross employee additions were over 50,000 while the quarterly annualized attrition declined to 13.4 percent.

"Services growth in the fourth quarter was lower than we expected though we saw healthy growth in Financle and our Edge suite.

Pricing continues to be under pressure due to increasing commoditisation in the traditional outsourcing business, requiring us to ramp up productivity through automation and enhance our differentiation in large engagements," U.B. Pravin Rao, chief operating officer was quoted as saying in the statement.

Meanwhile investors gave a thumbs down for the company stock. The scrip after opening at Rs.2,135 at the NSE closed at Rs.1,995.20 down from Rs.2,122 the closing price on Thursday.

Paytm forays into eCommerce; to compete with likes of Flipkart