Infosys shareholders want Narayana Murthy back, but he declines

Successive shareholders who spoke at the 34th Annual General Meeting of Infosys suggested that he should be brought back to the company as his name is synonymous with Infosys. 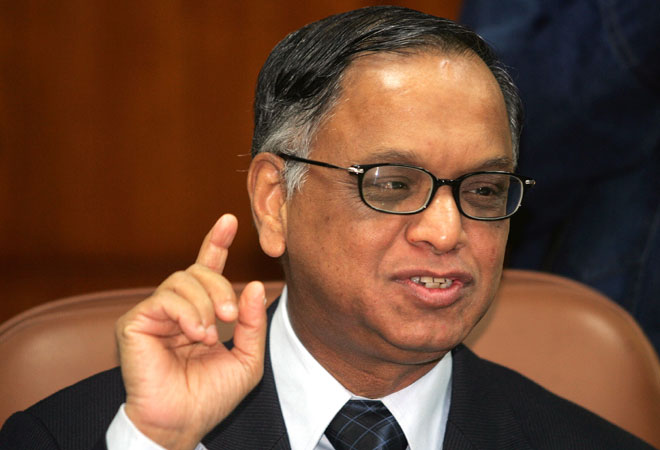 Infosys shareholders on Monday made a strong pitch for the return of co-founder Narayana Murthy to the company once again, which the IT czar declined by calling it words of "affection".

Successive shareholders who spoke at the 34th Annual General Meeting of Infosys suggested that he should be brought back to the company as his name is synonymous with Infosys.

"... take back Murthy as independent Director in the interest of the company," Gopalkrishna Rao, a shareholder said.

This was Infosys' first AGM without any of its founders on the board or associated with the functioning of the company in any way. Murthy attended today's AGM as a shareholder and was accompanied by his wife Sudha Murthy and son Rohan Murty.

Seven co-founders, led by Murthy, set up the Bangalore- based firm in 1981. He had voluntarily step down as Executive Chairman June 14, 2014, and as Non-executive Chairman on October 10, 2014.

Reacting to shareholders comments that he should be brought back to the company, Murthy said, "They are saying these things because they have some affection."

"But the reality is that today we have a very good set of people running the company, they should run the company, and we should all support them," he told reporters on the sidelines of the AGM.

"We should cheer them from outside, there is no need for anybody from outside to get back to Infosys," he added.

Responding to suggestion that Murthy should be brought back, Infosys Non-Executive Chairman R Seshasayee said Murthy is like Bhishma Pitamah (the epic character of Mahabharata) for Infosys.

"Mr Murthy whether he is sitting on this side of the dais or on that side of the dais, he is our mentor...he is like Bhishma Pitamah and we will certainly go to him for any advice to conduct the business in the manner that he has performed," he said.

"....Mr Narayana Murthy regardless of where he is- we would certainly be benefited from his advice and his guidance, we will continue to seek his advice...." he added.

Infosys recently appointed R Seshasayee as Non-Executive Chairman in place of K V Kamath, who is set to take over as head of the New Development Bank of the BRICS group in July.

Murthy, as he arrived at the AGM was greeted by Infosys CEO and MD Vishal Sikka, who also sought his blessings.

Speaking to reporters on the sidelines of the AGM, Sikka said, "As Sesh (Seshasayee) said he (Murthy) is Bhishma Pitamah for us, we are very excited to see him always. I was actually very happy to see him."

Questioned about the absence of other co-founders at the AGM, he said, "All of them may have other engagements ...see any body who is a shareholder can come to AGM..."

Asked whether as a shareholder of the company he is confident about staying invested in Infosys, Murthy said, "absolutely, there is no doubt at all. Everybody there on the podium (Management team) is smart, dedicated, they are working hard, they want best for Infosys and therefore we are all hundred per cent with them."

Asked to evaluate Sikka's performance as he completes one year in office, Murthy said, "He has been working very hard, he has brought a lot of good ideas and I'm sure that they will all provide result and we have to be patient and he has set a very ambitious target for 2020, we all wish him the best."

"I'm extremely happy (about Sikka's goal of achieving $20 billion revenue by 2020), he is a great leader, he has aspirational target. We should all support him, we should all pray that he succeed," he added.

Responding to a question if he can be expected to post Sikka some tough questions as a shareholder, Murthy said "No, no I'm very happy....so I don't need to ask any question."