A day after Formula One supremo Bernie Ecclestone said the 2015 Indian Grand Prix will be put off, Sameer Gaur, chief executive of Jaypee Sports International, said they want the race to be held in 2015 as scheduled. 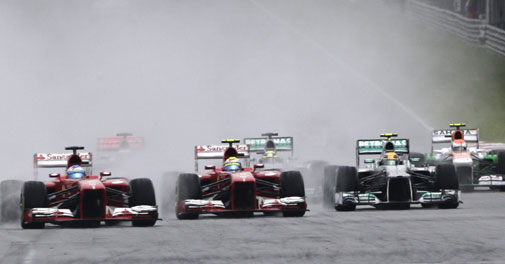 Jaypee Group, promoters of the Formula One Indian Grand Prix, are still keen on holding the 2015 race as scheduled despite Formula One supremo Bernie Ecclestone wanting it to be pushed to 2016.

A day after Ecclestone said that the 2015 Indian Grand Prix will be put off, Sameer Gaur, chief executive of Jaypee Sports International, told IANS they want the race to be held in 2015 as scheduled.

Gaur said he would have a one-on-one with Ecclestone for a mutually agreed date in 2015.

"I have not yet read the media reports on the Indian Grand Prix. I will soon set a meeting up with Mr. Ecclestone and talk to him directly over the matter. As I have said earlier, I would want the race to return next year but lets see what comes out from the meeting with Mr. Ecclestone," Gaur told IANS over the phone from Lucknow.

The India Grand Prix was dropped from the 2014 calendar, three years after its highly successful inaugural race in 2011.

While cancelling the 2014 race, Ecclestone had told IANS that the race would be rescheduled to first half of the 2015 season as a part of the Asian leg.

But Wednesday, the 83-year-old magnate was quoted as saying in the English media that the India round was more probable for 2016, by which Azerbaijan will be ready for its F1 debut.

"Probably 2016... they're (India) gradually getting over all the bureaucracy with the tax position inside the country and the general finance," Ecclestone had said.

Gaur maintained that race had a long future and will last the five-year contract amidst concerns from all stakeholders on bureaucratic and tax hurdles.