Maggi meals for 54 cr kids to go up in flames

Making a statement before the Supreme Court, Nestle informed the court that it had already destroyed 38,000 tonnes and sought permission to burn remaining 550 tonnes of it. The company also spent Rs 30 crore for the destruction process. 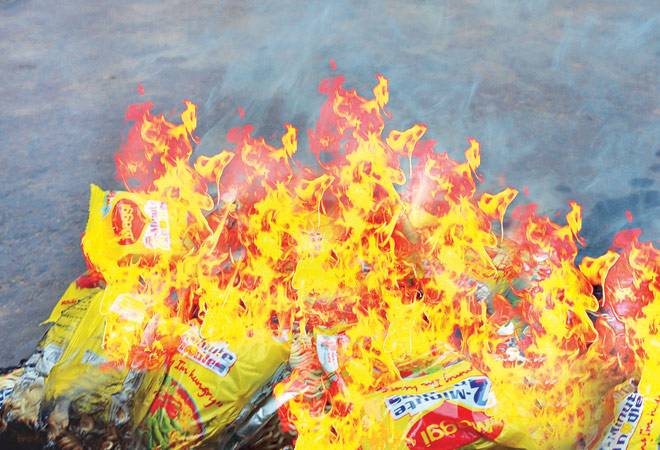 Nestle on Thursday said it is in the process of taking steps to destroy all the 38,550 tonnes of its "two-minute" Maggi noodles - which comes to approximately 54 crore packets - earlier recalled after the country's food regulator banned it alleging it was unfit for human consumption due to presence of lead and taste enhancer monosodium glutamate (MSG) beyond permissible limits.

Making a statement before the Supreme Court, Nestle informed the court that it had already destroyed 38,000 tonnes and sought permission to burn remaining 550 tonnes of it. The company also spent Rs 30 crore for the destruction process.

They are sent to cement factories and burned in their incinerators. The company said the recalled goods worth a total of Rs 420 crores. The recalled stocks are lying in over 30 locations across the country.

Appearing for Nestle, senior lawyer Harish Salve said it wanted to take the permission of the court as the matter was sub judice (whole matter was before the SC). He said such stocks were well past their shelf life and that its storage would give rise to conditions that may lead to health hazard at various locations.

But the Food Safety and Standards Authority of India's (FSSAI) lawyer contended that it was not being destroyed as per specification and all the more, the company should not be allowed to destroy the entire stock as it would amount to "destruction of evidence".

A bench headed by Justice Dipak Misra then said: "They (Nestle) may hold back some packets for the purpose of evidence. Ultimately what could be done with the old stock." But the court deferred the matter till September 30 after FSSAI's junior lawyer said it would like Attorney General Mukul Rohatgi to argue on behalf of it.

In June 2015, the Central government had moved the National Consumer Disputes Redressal Commission against Nestle, alleging unfair trade practices, false labelling and misleading advertisements by the firm. It has sought Rs 640 crore in compensation.

On 16 December, the SC barred the consumer forum from proceeding with the matter and summoned all case files before it.

Subsequently, Nestle cleared tests conducted by the Central Food Technological Research Institute (CFTRI), under the apex court's orders and were back in the market. All tests conducted on 29 samples failed to find any excess lead or artificial monosodium glutamate (MSG) in it. Every single sample was found compliant.

The CFTRI (the central government's laboratory) clarified that glutamic acid can be due to presence of ingredients like tomatoes, cheese, hydrolysed plant protein, hydrolysed vegetable protein, etc.