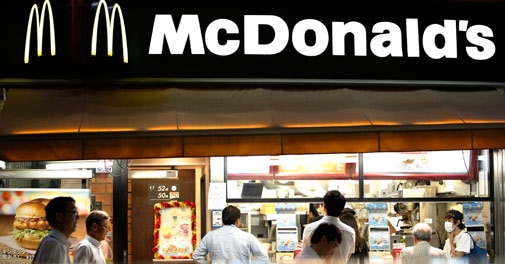 McDonald's has said a global sales figure fell 2.5 per cent in July, dragged down by persistent weakness in the U.S. and a food safety scare in China.

The results reflect what is likely to be just the beginnings of the fallout from a Chinese food scandal late last month. A TV report at the time showed workers at a McDonald's supplier, OSI Group, repacking expired meat.

McDonald's subsequently stopped using the plant in Shanghai, which left many of its restaurants unable to provide a wide range of items including Big Macs and Chicken McNuggets.

The company has since been working with other OSI plants to restore supplies to the affected restaurants. Still, sales are likely to continue suffering given the sensitivities around food safety in China.

Yum Brands, which owns KFC and Pizza Hut, says it did not rely as heavily OSI and quickly cut all ties with the company. But its sales have been battered as well.

McDonald's Corp., which has more than 35,000 locations around the world, warned earlier this week that the scandal puts its global sales forecast for 2014 "at risk." It had previously said it expects sales to be "relatively flat."

If the figure were to fall, that would mark the first annual global sales decline since 2002. Janney Capital Markets analyst Mark Kalinowski also noted the decline in July could be the worst monthly showing in the past decade.

Back in the US, McDonald's has failed to boost sales since October amid intensifying competition and shifting eating habits. The drop last month came despite its sponsorship of the World Cup.

Part of the problem is that chains like Chipotle are gaining favor by touting more wholesome ingredients and the ability to customize food. McDonald's is trying to adapt on multiple fronts, including a "Build-Your-Own-Burger" test in Southern California and a new Bacon Clubhouse burger positioned as a premium offering at $5 or $6.

McDonald's CEO Don Thompson has also noted that the company's lower-income customers are struggling more financially, making them reluctant to eat out.

Thompson has also said McDonald's complicated its menu and slowed down service by introducing too many items too quickly. He says the company is working on getting the basics rights - such as improving service.

The one bright spot in July was Europe, where sales at established locations edged up 0.5 per cent.

McDonald's shares rose 17 cents to $93.48 Friday afternoon. Over the past year, its stock is down about 5 per cent.