IT giant Microsoft on Monday announced a strategic partnership with India's leading e-tailer Flipkart in which, as a first step, the online retailer will adopt Microsoft Azure as its exclusive public cloud platform. 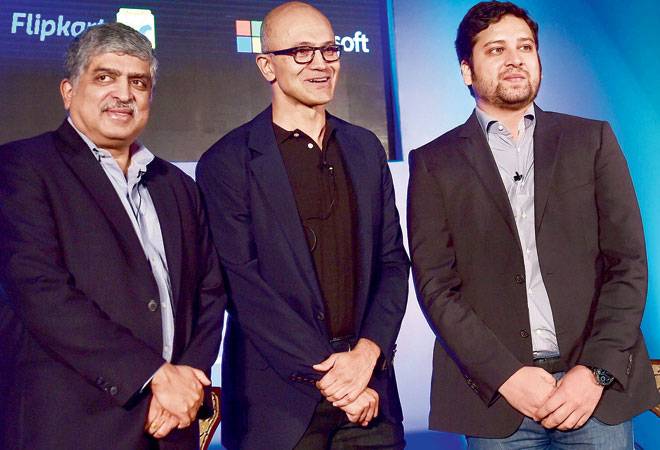 Microsoft CEO Satya Nadella with EkStep Co Founder and Chairman Nandan Nilekani and Flipkart co-founder and CEO Binny Bansal (R) during an event on startup stalwarts of India in Bengaluru on Monday.

IT giant Microsoft on Monday announced a strategic partnership with India's leading e-tailer Flipkart in which, as a first step, the online retailer will adopt Microsoft Azure as its exclusive public cloud platform.

"We are launching our strategic partnership together. I have always been an admirer of what Flipkart has done, in not only starting e-commerce, but now in payments and logistics. It is really getting India on the map... I'm pleased to announce that Flipkart has chosen Microsoft Azure as its exclusive public cloud platform," said Nadella.

"Of course this is just a start, because ultimately for us as well it is all about being able to support entrepreneurs of India to be able to create global scale businesses, and when we think about our mission that's at the centre of it," he said.

Microsoft's strong presence in India along with its global scale allows for continued growth and expansion, setting the stage for the long-term partnership," Microsoft said.

ALSO READ: Sometimes you are assigned what people think is sexy: N. Chandrasekaran

This partnership allows us to leverage our combined strength and knowledge of technology, e-commerce and markets to make online shopping more relevant and enriching for customers, Bansal said.

He said Flipkart in its tenth year of operations had taken ecommece to about 50 million customers and the question now was how to take this to 500 million people in the next ten years.

With 'powerful insights' about its business and new, intelligent services, Flipkart can deliver increasingly relevant and personalised experiences to its customers, it added.

The partnership has come at a time when Flipkart firm Flipkart is looking to raise a fresh round of funding but has faced a valuation markdown by one of its mutual fund investors. In December, a muttual fund managed by Morgan Stanley drastically marked down the value of its holdings in Flipkart by about 38% to $52.13 a share, down from $84.29 a share in the June quarter. The mutual fund currently holds 1,969 shares in Flipkart that are collectively valued at $102,644.

This effectively pegs Flipkart's valuation at $5.54 billion, compared to $9 billion in the previous quarter and $15.2 billion when it last raised capital in July 2015. Prior to this, Flipkart has also witnessed a series of markdowns.

Sikka says 'malicious stories' being spread to target him