All is well in Infosys; Nandan Nilekani can name next CEO without any advice, says Narayana Murthy

Murthy said there is no need to give advice to Nilekani on finding and appointing new CEO for Infosys as he had done well during his stint as the CEO of the IT company. 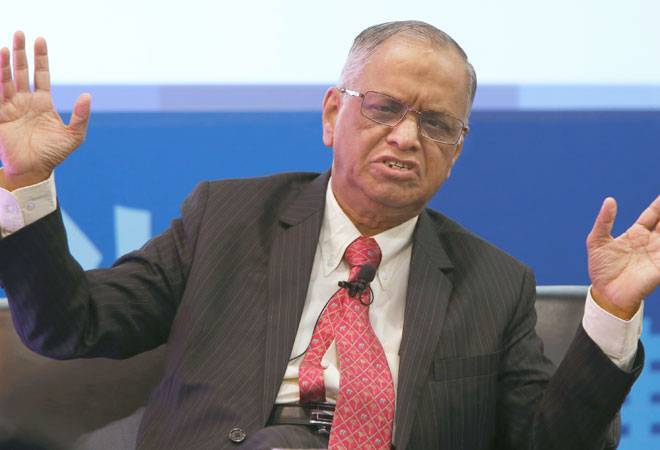 Infosys founder N R Narayana Murthy once again reiterated his faith in Nandan Nilekani, the present chairman of the company, saying that he can do his job well and doesn't need any advice. Murthy said on Wednesday that all is going as planned in the Bengaluru-based tech giant and Nilekani is well capable of simplifying lots of complexities prevalent in the company.

"Absolutely, all is well. Remember, in my speech with the investors, I said now that we have Nandan as the chairman, we can all sleep well. He (Nilekani) is a very organised person. His strength is simplification of complex ideas. There were lots of complexities and therefore he has his hands full," he told reporters after the Infosys Prize distribution event for 2017-18.

Murthy said there is no need to give advice to Nilekani on finding and appointing new CEO for Infosys as he had done well during his stint as the CEO of the IT company. "Having been a good CEO himself he knows what is required. So, there is no need for advice," he said.

Some names were reportedly under consideration for the position of Infosys CEO, including that of former Infosys executive Ashok Vemuri. Vemuri had quit Infosys in 2014 after Vishal Sikka was brought in as the company's CEO and managing director. Although, media reports had suggested that he might be named the next Infosys CEO but he has reportedly expressed his unwillingness to accept the job.

"Let's leave it to him and let's all keep quiet, so that he can do his job well," Murthy further addded in his statement about Nilekani.

His remarks praising Nilekani come days after he had expressed disappointment over Infosys under its present Chairman giving a clean chit to the company's $200 million acquisition of Israeli technology firm Panaya. On October 24, Murthy had expressed his discontent that none of the questions raised by him on "poor governance" in the company had been answered by board of directors transparently.

The Panaya deal was carried out when Vishal Sikka was was the Infosys CEO and was a bone of contention between him and Murthy. Sikka had quit amid turmoil in the company after a prolonged battle between the Board and the company founders leading to the return of Nilekani, a company co-founder, at the helm in August.

Amazon pumps Rs 2,900 crore into its India unit in a challenge to rival Flipkart