Nilekani, a co-founder, is the right person who can restore the company's waning credibility among the investor community. Infosys is badly bruised by allegations of multiple slips in corporate governance - unthinkable till a few years ago. 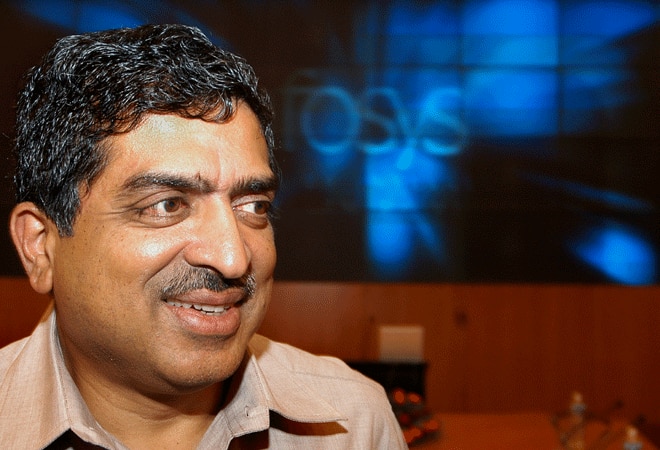 Nandan Nilekani's return to Infosys, albeit as non-executive Chairman, is being cheered in many quarters, particularly by the investor community. Here are some reasons why he is a favourite of the community.

1. Nilekani, a co-founder, is the right person who can restore the company's waning credibility among the investor community. Infosys is badly bruised by allegations of multiple slips in corporate governance - unthinkable till a few years ago.
Since it was founded by N.R. Narayana Murthy and six other engineers in Pune in 1981 with an initial capital of Rs 10,000, Infosys has been feted for everything from its business model to delivery excellence and its leadership to its corporate governance. It was the first Indian company to offer stock options to employees in 1993, the year it went public.
A total of 16,237 employees benefited until ESOPs were halted in July 2003. In 1999, it became the first Indian company to list on the Nasdaq. It was also the first in India to report quarterly financials, issue guidance against insider trading, come up with the concept of a lead independent director, and have directors assessed by peers. The success of Infosys is Nilekani's legacy and he would protect it by all means.
2. Nilekani will be able to attract a good CEO and assemble a crack team. In fact, he has to do a Murthy, who assembled a team with clear-cut roles in the 1990s and early 2000s: Nilekani was the strategist and rainmaker; Kris Gopalakrishnan was the technologist; S.D. Shibulal was the delivery specialist while Mohandas Pai was the firm's financial wizard.
Murthy held the team together. Nilekani knows the DNA of the company and is less likely to make a mistake by bringing in a flamboyant tech superstar as CEO. Vishal Sikka was flamboyant, and therefore, a cultural misfit in a conservative South Indian company - remember how Infosys always used to under promise and over deliver.
Nilekani would also be able to attract what one analyst says is the "alumnus" of Infosys or talented executives who quit over the past five years. Executives such as Ashok Vemuri and B.G. Srinivas.
3. Finally, investors think Nilekani would be able to ensure business continuity. Any negative commentary from a high profile client would send wrong signals at the moment.
Old customers remember his commitment and investors his track record as CEO - it was a different day and age, but between FY 2003 and 2007, when he was at the helm, the company's CAGR clocked 38 per cent; profits grew 41 per cent.
Considering the maturity of the industry, such numbers would never be repeated but investors, being investors, expect Infosys to return to its bellwether days.
Tags: Nandan Nilekani | Infosys | Infosys non-executive Chairman | investor community | N.R. Narayana Murthy | Kris Gopalakrishnan | Ashok Vemuri

Right to Privacy to not affect Aadhaar-PAN linkage:UIDAI CEO