"A re-launched Nano with some of the differences that we're trying to incorporate, yes I do," said Tata in an interview on CNBC's Managing Asia programme. 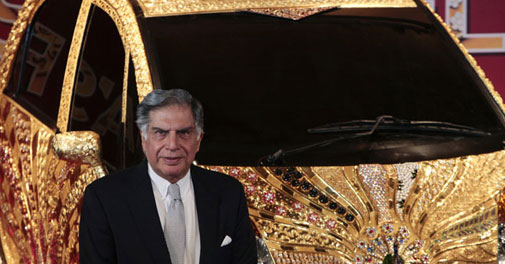 Tata Motors is incorporating some changes in the Nano for a relaunch and its former chairman Ratan Tata thinks the small car can still take off in the home market.

"A re-launched Nano with some of the differences that we're trying to incorporate, yes I do," said Tata in an interview on CNBC's Managing Asia programme.

Tata said the company has plans to launch the Nano outside of the Indian market, but did not give a timeframe for that.

"Maybe it gets launched in another country like Indonesia, where it doesn't have the stigma and the new image comes back to India. Or maybe as a changed product that gets marketed in Europe. There's a lot of interest in Nano outside India," he added.

The Nano, positioned as the "people's car" starting at around $2,500 for a stripped-down model, has struggled to gain traction since its launch in 2009.

Sales of the vehicle plunged 74 per cent year-on-year during the April-September period to 10,202 units.

In October, Tata Motors introduced a new model of the car, the Nano CNG emax an eco-friendly variant of the original Nano that can run on either gasoline or compressed natural gas in a bid to revive sales.

The automaker is also slated to launch a diesel-powered version of the vehicle by the end of March 2014.

Tata said the marketing around the Nano as the world's least expensive car is partly to blame for its failure to gain popularity. Instead, it should have been promoted as a safer alternative for the millions of families who tend to crowd more than two members onto two-wheelers.

"I always felt the Nano should have been marketed towards the owner of a two-wheeler because it was conceived to give people who rode on two-wheeler an all-weather, safe form of transportation, not (the) cheapest," Tata said.

"It became termed as the cheapest car by the public, and [also] I'm sorry to say, by the company when it was being marketed," he added.