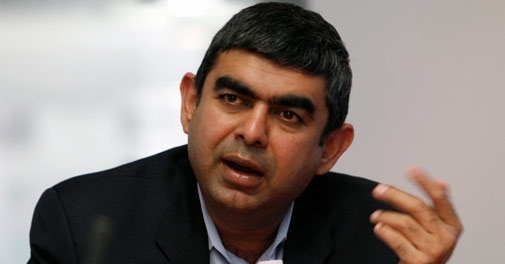 Infosys will pay its new chief executive officer Vishal Sikka up to $5.08 million (Rs 30.3 crore) in annual salary besides a stock option of $2 million, a package considered lower than global peers.

Sikka, 47, will replace SD Shibulal and take charge on August 1.

India's second-largest software services exporter sent out a circular calling for an extraordinary general meeting (EGM) of company shareholders on July 30 at Bangalore to approve appointment of Sikka as the new Chief Executive Officer (CEO).

According to the circular, Sikka will be paid an annual base salary of $9,00,000 and annual variable pay of $4.18 million.

The former SAP executive will also be eligible to receive an annual stock option equal to $2 million in value.

Hit by several top-level exits, Infosys last month undertook a major shake-up bringing in for the first time an outsider, Vishal Sikka, as CEO even as mentor N R Narayana Murthy and his son Rohan stepped down four years ahead of their tenure.

Sikka, 47, who was previously executive board member of German IT firm SAP, will replace S D Shibulal, one of the seven engineers who founded Infosys in 1981, from August 1.

Along with Murthy, who upon return from retirement in June last year wanted five years as chairman to turn around the sagging fortunes of Infosys, Executive Vice Chairman S Gopalakrishnan will also step down on June 14.

Since his return, Infosys had seen 11 top-level exits including that of CFO V Balakrishnan, global manufacturing head Ashok Vemuri and President BG Srinivas.

Murthy will be replaced by veteran banker K V Kamath as non-executive Chairman of the Infosys board.

Infosys, in the circular, said Sikka will be appointed for a five year period ending June 13, 2019.

Murthy will be designated chairman emeritus from October 11, the day Kamath will assume the role of non-executive chairman.

Sikka, who quit SAP in May, comes in after four straight years of narrowing margins at Infosys.

Why Woodland is selling outdoor adventure to Indian youth