The struggling company said it sold 8.8 million Lumia smartphones, a 40 per cent increase from a year earlier. But that was not enough to keep Nokia Corp from giving a negative outlook for the devices and services unit. 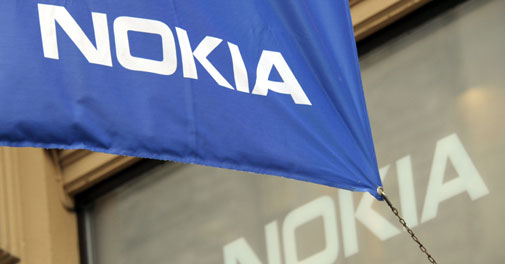 Nokia has reported a third-quarter net loss of 91 million euros ($125 million) as sales at the handsets unit, which it is selling to Microsoft Inc, continued to plunge.

The handset maker had registered a net loss of 969 million euros a year earlier. Nokia's revenue for the quarter under review fell more than 20 per cent to 5.6 billion euros.

The struggling company said it sold 8.8 million Lumia smartphones, a 40 per cent increase from 3 million a year earlier and slightly more than markets had expected. But that was not enough to keep Nokia Corp from giving a negative outlook for the devices and services unit it has agreed to sell to Microsoft Corp for $7.2 billion.

Net sales at the devices and services unit fell by another 19 per cent in the quarter, to 2.9 billion euros. It sold 64.6 million mobile devices in the period, down from 83 million a year earlier.

Although smartphone sales were up near 9 million, they lagged well behind chief competitors Apple with quarterly sales of 33.8 million and China's Huawei's at 13 million. The world's No.1 mobile phone maker, Samsung Electronics, sold more than 88 million smartphones in the third quarter.

However, the network business, which will constitute the bulk of operations going forward, did well, causing shares in the company to rise.

Nokia, which bought the other half of its joint networks venture from Siemens, expects a positive operating margin of some 12 per cent in the unit, known as Nokia Solutions and Networks, with "solid net sales growth on a sequential basis."

The company's share price jumped more than 5 per cent to 5.28 euros in early afternoon trading in Helsinki.

Nokia board chairman and interim CEO Risto Siilasmaa described the third quarter as "the most transformative" in the company's history. He was upbeat on the purchase of NSN and the sale of the handset unit to Microsoft, saying they would "significantly improve the earnings profile."

The company repeated its target to save 3 billion euros in operating costs by the end of 2013.