Murthy, one of India's best-known IT leaders, claims that iGate knew about his relationship with a subordinate employee and "improperly" used the reporting policy to terminate him. 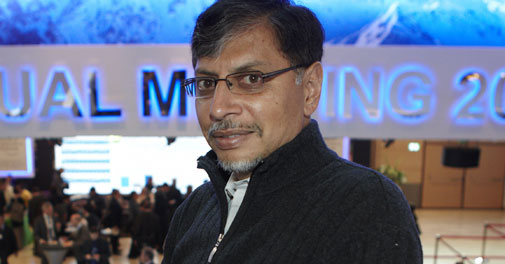 Former iGate CEO Phaneesh Murthy, who was sacked by the US-based IT services firm for failing to disclose his relationship with a subordinate in May this year, has slapped the company with a law suit.

The suit was filed before a California court last Monday.

Murthy, one of India's best-known IT leaders, claimed in the law suit that iGate knew about his relationship with a subordinate employee and "improperly" used the reporting policy to terminate him.

"I have a letter from one of the independent directors of the Board of iGate saying he knew of my relationship with the employee since January 2012," Murthy said.

The disgraced former chief executive has also claimed iGate withheld vested stocks worth about $17 million due to him.

"I have reached out to them (iGate) multiple times for my employee benefits, but they always said it will happen soon. That has not come through for the last six months. As per the employee contract, I'm eligible for the vested stock, which is 527,000. The worth of my vested stock is about $17 million and it is my life saving. I did not sell the stocks as the Board requested me not to sell saying it would send a negative signal," he said.

"Employment contracts are sacrosanct. I have put in lot of hard work and created value for the firm and still if they do not to honour the contract, it is not a good thing. This will not stand in the US court," he said.

MUST READ:Phaneesh Murthy does not have a glad eye but attracts people

When asked whether iGate has contacted him post his filing the law suit in the court, he answered in the negative.

On claims that the company board already knew about Murthy's relationship with the subordinate, iGate Spokesperson Prabhanjan Deshpande said: "We believe that this claim has no merit, and we intend to vigorously defend this action."

California-headquartered iGate in a filing with the US Securities and Exchange Commission (SEC) in March had said: "Upon termination other than for cause, Murthy would receive a lumpsum payment of 12 months severance at $1,000,000."

According to a filing with the SEC in May, he is, however, entitled to a post termination benefit of $6,000 per month till he and his spouse reach the age of 65.

Murthy, one of the youngest directors and a rising star at India's second largest software services firm Infosys, was forced to quit the firm in 2002 following a sexual harassment lawsuit that was settled out of court.