Firms where promoter pledge has fallen in past few quarters are Adani Green, Tata Consumer, Torrent Pharma and Zee In the quarter under review, the pledging rose for nearly 60 per cent firms

The overall value of companies with pledged shares has fallen nearly 30 per cent amid heavy market sell-off in the quarter ended March 2020, a report said. The correction in share value has further hit the companies with high pledged promoter holding, Axis Capital said in the report. Companies which have seen a staedy rise in promoter pledge in the last few quarters are Adani Power, Aurobindo Pharma, CG Consumer Electricals, Emami and Motherson Sumi. Firms which have recorded a drop in promoter pledge in past few quarters are Adani Green, Tata Consumer, Torrent Pharma and Zee.

In the quarter under review, the pledging rose for nearly 60 per cent and fell for about 25 per cent of the 42 companies that have pledged their shares, the report said. "During the quarter, Torrent Pharma and MRF revoked their entire pledged shares, while Godrej Consumer and Godrej Industries created fresh pledge of 1% and 6% respectively. Max Financial saw a maximum increase with pledged shares at USD 493 mn (currently ~95% vs. ~72% last quarter). Apollo Hospital saw the sharpest decline with the pledged shares at ~37% vs. ~67% previous quarter," it added. 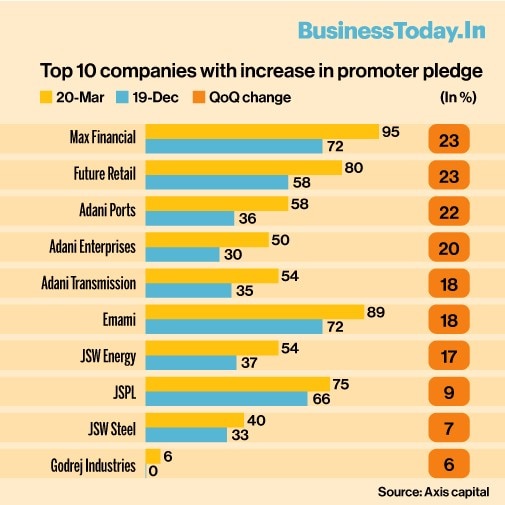 Group's so as to repay debenture holders till further orders. The second one restrained ICICI Home Finance from selling pledged shares that secured a term loan.

Pledging of shares is an option with the company promoters to secure loans so as to meet working capital requirements, personal needs and fund other ventures or acquisitions. In case promoters fail to make up for the difference, lenders can sell the shares in the open market to recover the money.