Maintaining its hawkish stance, the central bank has raised the short-term lending or repo rate by 0.25 per cent to 7.75 per cent. It also slashed the cost of short-term funds for banks by cutting the marginal standing facility rate to 8.75 per cent. 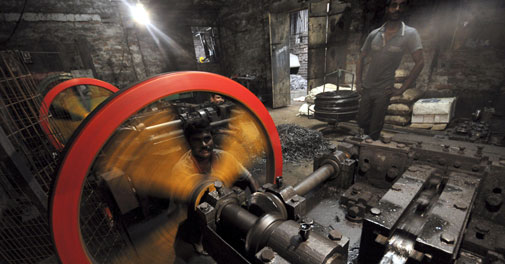 Already reeling under the pressures of high cost capital, the Indian industry has expressed strong disappointment over the Reserve Bank of India's (RBI) decision to hike short term lending (repo) rate by 0.25 per cent, saying the move will hit investments and hamper growth.

Maintaining its hawkish stance, the central bank on Tuesday raised the short-term lending or repo rate by 0.25 per cent to 7.75 per cent.

"Industry is certainly disappointed over the increase in repo rate. The kind of inflation we are witnessing in India is more of a supply side phenomenon. While raising interest rates would have little impact on such inflation, it will certainly penalise Indian industry that is already in the midst of a slowdown", Ficci Secretary General Didar Singh said.

"To mitigate the mismatch between supply and demand of funds, banks will have to step up efforts to mobilise deposits. In such a scenario, one could well see an increase in both the deposit and lending rates," Singh said.

The RBI also slashed the cost of short-term funds for banks by cutting the marginal standing facility (MSF) rate by a similar quantum to 8.75 per cent.

"MSF cut marks a cumulative rollback of 150 bps by the RBI over the last six weeks. With repo rate also getting calibrated, the monetary policy has now migrated towards a neutral backdrop from an unconventionally tight framework which was instituted since mid-July 2013 to curb exchange rate pressures," Assocham President Rana Kapoor said.

The central bank left other rates, such as the cash reserve ratio (at 4 per cent) and mandatory holdings in government securities and other liquid assets as a solvency measure (SLR) at 23 per cent, unchanged.

"The rise in repo rate has come as a disappointment to industry especially as the investment climate continues to be weak and growth outlook remains muted as a high interest rate regime deters consumption and investment demand," CII Director General Chandrajit Banerjee said.

Are Indian start-ups parting with too much equity?

Coal blocks auction may be delayed further to March