These are the most expensive and the most powerful Royal Enfield bikes in India till date. 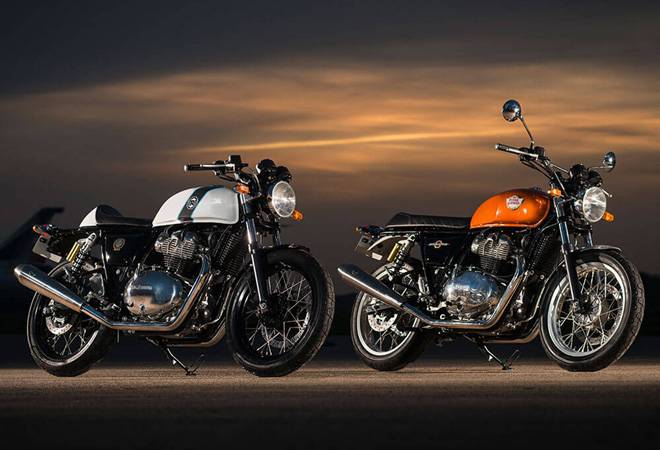 The launches that marks Royal Enfield's foray into twin cylinder engine technology, a key element to its global ambitions after it was taken over by Eicher Motors in 1994, come within two months of their debut in the US market and barely two days after the launch in Europe. Produced solely in India, the prices of the bikes are significantly lower than in other markets. In North America and Europe, the Interceptor 650 was launched at $ 5799 (Rs 4.19 lakh) and the Continental Twin 650 at $ 5999 (Rs. 4.33 lakh).

Nevertheless, these are the most expensive as also the most powerful Royal Enfield bikes in India till date. Its existing line-up consists of nine bikes powered by engines that range from 350-500cc and priced between Rs 1.2-2.2 lakh. With the twins the company is aiming higher into segments and markets where global heavyweights like Harley Davidson and Triumph motorcycles rule the roost.

The two bikes come with a common 650cc engine that has been developed in house, that has a peak performance of 47 horsepower and peak torque of 52 Newton metres at 2500rpm. Harley Davidson's entry level bike in India, the Street 750 is priced at Rs 5.31 lakh. It also has a smaller Street 500 mobike in its global line up that is not available in India yet. It is priced at $6,899 in US. The Street 750 is priced upwards of $7,599 in the US.

"The multi cylinder 500cc plus segment is grossly under represented in India. We want to change that," said Siddhartha Lal, CEO, Royal Enfield. "That segment today is not more than 15000 units a year. We want  to expand it 10x, 20x, 50x of that just like what we did with the 250cc plus segment with our classic Bullet."

These are the first twin cylinder motorcycles to be produced by Royal Enfield since 1970.

"In India, we have over three million Royal Enfield customers of the 350cc and 500cc motorcycles, who have been waiting for an upgrade. We did not have an offering in the past. Now we have," said Rudratej Singh, President, Royal Enfield.

The launches come at a critical time for the company. The firm's purple patch with it's bread and butter Bullet 350 and Classic 350 bikes seem to be coming to an end. Royal Enfield's sales grew by only 3.6 per cent in the second quarter of this financial year, slowest in a quarter in more than 3 years.

Famous for having a waiting period even in the worst of times, the two bikes are now readily available to customers off the shelf. Further, having braved previous raids in it's  territory from Harley Davidson and Triumph, it is facing it's most potent home grown challenge yet in the return of the Jawa that would be unveiled on Thursday. In need of a blockbuster, Enfield would hope it's search would end with the Interceptor.