The survey encompasses 12 key risks that pose a number of threats to the entire economic ecosystem of the country. As per the report, a majority of the respondents surveyed this year have ranked 'Strikes, Closures & Unrest' as the major risk affecting the Indian economy. The survey encompasses 12 key risks that pose a number of threats to the entire economic ecosystem of the country. As per the report, a majority of the respondents surveyed this year have ranked 'Strikes, Closures & Unrest' as the major risk affecting the Indian economy (Fig.1). This is in sharp contrast to last year's survey results, in which 'Corruption, Bribery and Corporate Frauds' emerged as the topmost risk. This particular group of risks continues to command serious concerns for Corporate India, particularly in a year which has seen major unrests in the form of the Jat and Patel (to name a few) demand for reservations in education and government jobs, etc. In addition to the heightened social unrest this year, labour unrest, strikes and demonstrations protesting reforms, land acquisition and industrial projects continue to shape business perception. The risk category held top spot in the 2013 survey results, went down to No. 2 in 2014, and subsequently declined to 6th position in 2015.

'Information & Cyber Insecurity' has been ranked as the second biggest threat to businesses in India, for two consecutive years.

'Crime' has jumped to 3rd position in 2016, from its 5th ranking in last year's India Risk Survey. The National Crime Records Bureau (NCRB) data for 2014 shows an increase of 8.9 per cent in crime over 2013. In terms of numbers, NCRB registered a total of 72,29,193 cognisable crimes, comprising 28,51,563 Indian Penal Code (IPC) crimes and 43,77,630 Special & Local Laws (SLL) crimes in 2014, as against 66,40,378 registered cases in 2013. Higher crime numbers are often closely associated with the rise in civic unrest, which creates favourable conditions for criminals of all hues. Further, crime against women in India is on the rise, which continues to shape the country's image internationally and within the wider business community.

'Terrorism & Insurgency' has dropped a spot from its previous ranking at No. 3 to No. 4 this year. The devastation that takes place from terror attacks can easily disrupt the entire business operations. As per the report, a major fear is the rise of terrorist activities in the Middle East and its expansion to the Indian subcontinent. Along with it, growing radicalisation of disgruntled youth is a major concern for policymakers of the nation. India's sustained improvement in its ratings in global corruption and ease of doing business indexes in the last two years has contributed to the decline in the ranking of the risk of 'Corruption, Bribery & Corporate Frauds', which has slipped four places to 5th position in the India Risk Survey 2016.

'India's sustained improvement In the Corruption Perceptions Index (CPI) 2015, India improved its rank to 76, which is the best in the South Asian region after Bhutan. India did even better than another major Asian neighbouring country, which has been ranked 83rd in the index. In the World Bank's Doing Business Index, India improved its rank to 130 in 2015, up four places from 134 in 2014. Likewise, after five years of constant decline, India's rank improved 16 places to 55 in the World Economic Forum's (WEF) Global Competitive Index 2015-16' says report. The risk of 'Political & Governance Instability' has been ranked at No. 6 in the IRS 2016 this year. The report assumes that recent policy changes, such as proposed introduction of Goods and Services Tax and approval of Foreign Direct Investment in multi-brand retail etc., will create a positive environment for business in the country and will help in reducing the risk of 'Political & Governance Instability'.

The report also shows top three risks across different industry sectors. Most of the sectors take strikes, closures and unrest as the major risk to the industry followed by crime. 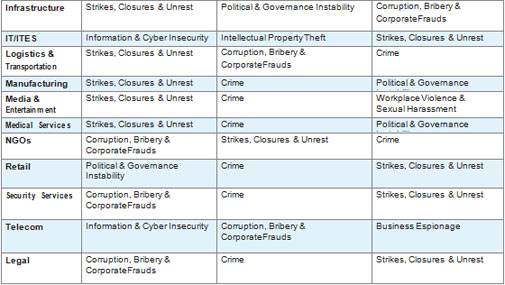 FICCI-Pinkerton India Risk Survey 2016 showcases the views and perceptions of business leaders, policymakers, experts, as well as professionals across various sectors and geographies, regarding strategic, operational and safety risks to business establishments. This survey was conducted across the entire industry spectrum covering different geographical zones of the country.