Starbucks comes up with Indian blend of coffee

Starbucks currently sells blends from Kenya and Latin America, among others, at its stores. The newly launched India Estates Blend, sourced from Tata Coffee's estates in Karnataka, will also be available at the stores now. 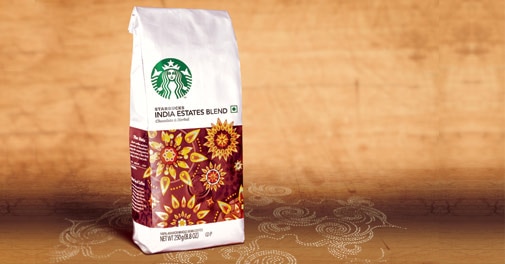 With an aim to widen its reach and cater to the local palette, Tata Starbucks has launched an Indian blend of coffee - the single origin Indian Estates Blend.

It also announced the opening of the 25th store in the country - in Pune. It opened its first store in Mumbai in October last year.

Tata Starbucks Ltd is an equal joint venture between Seattle based Starbucks Coffee Company and Tata Global Beverages. Today, there are 25 stores across Mumbai, New Delhi and Pune. It also plans to enter Bangalore by the end of this year. Starbucks has more than 17,000 stores across 60 countries.

The newly launched India Estates Blend, sourced from Tata Coffee's estates in Karnataka, will be available at Starbucks stores.

John Culver, group president, Starbucks China and Asia Pacific, Channel Development and Emerging Brands, said the product is not just sourced, but roasted and packaged in India as well.

"We have a long-term commitment to work closely with the coffee growing communities where we do business and elevate the awareness of high-quality arabica coffee in India," Culver said, during the product launch.

Culver, who has been with Starbucks since 1995, took the participants through a coffee tasting session. He provided anecdotes on what one should look at in terms of smell and the taste of coffees from various geographies.

Starbucks currently sells blends from Kenya and Latin America, among others, at its stores.

Avani Davda, CEO, Tata Starbucks Ltd, said in a press statement that the product has been specifically developed for the Indian market in association with Tata Coffee. She, however, did not rule out the possibility of exporting to Starbucks stores abroad.

"This coffee has a long way to go," she added. Davda broadly said that the company plans to continue its expansion based on market analysis. Growth prospects in India are good, according to her.

Depending on the products success, the company would also consider selling through other retail mediums, she said. Davda said that the Indian consumer today is ready to experiment and willing to try different things. She is optimistic - first-time users can easily be converted to regulars, she added.