Telangana govt reaches out to IT, pharma sectors

Speaking to Business Today, President of Nasscom R Chandrashekhar said, "It was very gracious on the part of the chief minister and his son to specifically invite me and to be very particular that I should attend the swearing in." 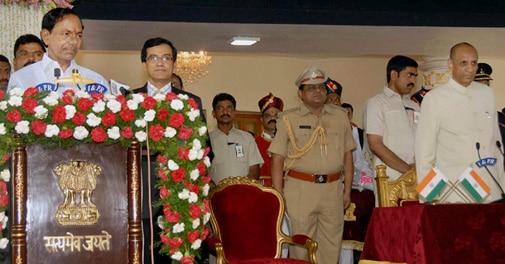 R. Chandrashekhar, President of Nasscom, the IT industry lobby group was among those who attended the swearing in ceremony of K. Chandrasekhar Rao as the first chief minister of the new state of Telangana on Monday. Speaking to Business Today, Chandrashekhar said, "It was very gracious on the part of the chief minister and his son to specifically invite me and to be very particular that I should attend the swearing in."

He feels the invitation, in a way, indicates that they attach a lot of value to the industry.

"They have also reached out and sought that there should be continued coordination and interaction with the industry and we are certainly happy to help the government and support it in its initiatives and make our own suggestions to the government as to what is in the best interest of the industry and the state," he said. He sees this reaching out as a positive early sign from the new government.

What perhaps adds an element of hope, though Chandrashekhar is not able to comment, is the speculation that K T Rama Rao, the son of the chief minister, is likely to be the IT and industries minister. Others in the industry, like B V R Mohan Reddy, the vice chairman of Nasscom, see in him, a young leader who has been with the IT industry and has studied abroad. The new government also reached out to the pharma industry. At the swearing in for instance, there was Satish Reddy, president of the Indian Pharmaceutical Alliance (IPA) and the chairman of Dr Reddy's Laboratories.

Happy that the new chief minister made a reference to a desire to hold interactions with pharma industry, Venkat Jasti, chairman and CEO of Suven Life Sciences, said, in the informal meetings that the industry representatives have had with K T Rama Rao, he has been very positive as he has indicated that pharma and its infrastructure, among other industries, will be a top priority for the Telangana government. In his first speech after taking office the new chief minister said that the state government would soon come out with an industry-friendly industry policy.

Why RBI should continue to fight inflation under new govt