SoftBank's opinion is not the only opinion in the room, says Uber CEO Dara Khosrowshahi

"I think Travis is going to be in a side role going forwards, but those are his words, not mine." 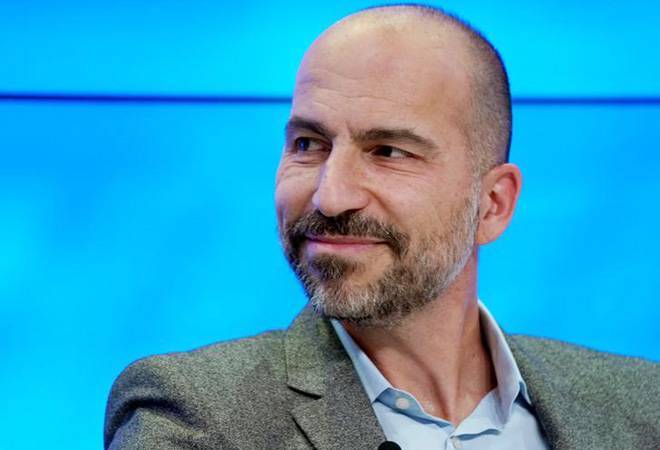 Five months into his job as the CEO of Uber Technologies, Dara Khosrowshahi has had his hands full repairing the image of world's largest ride-hailing service, dealing with intensifying competition and taking the company forward, all in the media's spotlight. On his maiden visit to India, Khosrowshahi spoke to the media in the capital on Thursday and by referring to India as a "core market" multiple times, he has tried hard to dispel all doubts about Uber exiting the country any time soon. Take a look:

On the potential of the Indian market

The Indian market is an incredibly important market, a core market for us. It accounts for more than 10% of our trips and I expect it to account for a higher percentage as we go forward. The Indian consumer is demanding in terms of price, in terms of quality of service, so India can, essentially, be a sort of laboratory for us for the next 6 billion consumers who are going to have exposure to our products.

At this point, my firm belief is that the greatest value we create here is to continue to invest and grow our product, not just for India's promise but for the role that India is going to play in shaping our product for the rest of the world.

On profitability and future plans for India

I can't specifically disclose how much we invest in India but I can tell you it's a lot, and that investment is going to continue. We are now in 29 cities in India. One real mistake some companies make early on is that they try to expand before they perfect their product. Our product in India is very good, but we are focussed on quality, which means zero defects in terms of driver-partner experiences and rider experiences. Then, the match rate that we have achieved on our UberPOOL product is second to none - the technology that we are launching there is exciting in terms of improving our matching, expanding the types of vehicles that we use. So while our current city coverage is good, it's not that broad, that we are defocussed from improving our product before scaling up. But yes, we will be in more cities in a few years from now.

We want to essentially create a sustainable model, especially for micro-entrepreneurs in India, our driver partners who will engage more and more with our ecosystem. In just a couple of years we now boast 300,000 driver partners and we think we can increase that five-fold or even 10 times over the next decade. That will, of course, require investment and as you mature you want to combine investment with profitability. I think we are on the right track on that front. Our operations are not profitable today, but then again if they were profitable then we weren't really investing enough.

In developing a marketplace, you need a demand and supply match, and in the early stages, you sometimes have to pay to build up liquidity. The market can become long-term sustainable once liquidity starts to take off. One example of this is our UberPool product. It is getting more than 1% of share rides because it helps congestion and is greener. But it's something that a lot of people don't take to. Globally we lose a lot of money in Pool but we continue to invest in it because this is early stage of a product that we believe in long term and we're building liquidity. We are quite scientific in how we invest and we are investing in the India market sometimes on the supply side sometimes on the demand side because we believe in the long-term viability of this market.

One of our newest businesses that we're excited about is UberEats. It is one of our fastest growing services in the world, in India especially. We are already in 9 cities and expanding very rapidly.

On SoftBank's comments that Uber will focus more on profitable markets, not Southeast Asia

SoftBank is a respected investor but the decisions that we take and the strategies that we undertake are ones that I am driving as CEO in concert with the board. While SoftBank may have an opinion, theirs is not the only opinion in the room. And it is my belief that we as a company need to have a balanced profile in terms of growth and investment.

So we are going to continue to invest in developed markets which will be profitable but because of their sheer size I would be actively investing in markets like India and Latin America etc.

As a company we talked about being a $40 billion growth bookings run rate but we account for less than 1% of the overall transportation industry. This is a $5 trillion industry that we are competing in and that is the ultimate size of the prize that we are aiming for. So if we weren't investing in these kinds of big markets with a big population that have a lot of growth ahead of them then we won't meet the target.

On taking on rival Ola

We have a lot of respect for Ola. They are a very strong global competitor and that helps our competition, which in turn makes us both better. This competition has certainly played a part in how our service has developed in India. But we are quite confident about our competitive position here. If you look at driver sentiment, rider sentiment and the quality of service, we are the leading player in India and we intend to keep it that way through continued investments, both in terms of people and building our services.

On plans for Uber

There are a couple of directions I would take the company in. Firstly, though Uber started with cars, I would like to think of it much more as a mobility platform. If you look at India, we already have autos. But more than that we want to open up our platform - and this is a real time demand and supply matching - to all modes of transportation, end-to-end.

We currently account for less than 1% of miles driven in the world and we are currently an alternative to taxis. But what we really want to be is an alternative to car ownership itself. If that happens then car ownership turns into car sharing, and that will solve all kinds of problems from traffic issues to pollution. If we look at the next step of going autonomous, we can really introduce safety here and get roads that are less congested along with mobility that is cheaper.

One problem with that is when you drop the price of mobility, demand goes up. So you may end up with a congestion issue again. So we're taking to the air. We're investing in a product called Uber Elevate that is looking at the potential of vertical take-off and landing vehicles. With battery technology rapidly improving in terms of size, power and storage, we believe we are now in a position for manufacturers to build vehicles with multiple rotors that make this possible. This also means that the noise pollution they create will be much less compared to helicopters. However, it will take about five years or so for these vehicles to be available on a pilot basis. Ultimately, what we want to create is not only an Uber on the ground but also one in the sky.

On facing regulatory challenges in many countries

Unlike other technology companies that deal in bits, we deal in bits and atoms. One of the key success factors for me as CEO of this company will be to increase the dialogue that we have with local regulators, which encompasses some back-and-forth and compromise as well. It's a good conversation that we are having with the UK authorities and all over the world and what is working for us is that every country, every state, every city wants transportation as a service, making it available to more and more of its citizens at affordable price. They also want to use the platform for job opportunities. So I believe our regulatory conversations are going to get better, not worse.

On Uber's plans for autonomous vehicles

The plan is accelerating very nicely. We've had over 2 million miles on the road. And the advantage that we enjoy is that we are developing our products technology under the same roof as our wide network of cars. That allows us to develop our autonomy not as a lab experiment but in terms of real commercial use. You will see Uber autonomous vehicles within a year.

We are now in a partnership with Toyota, in terms of developing their autonomous car concept along with our software. We will also be announcing a number of new partnerships in the coming months.

Travis is a valued board member of ours and he's been nothing but helpful for me in terms of giving me advice. I am changing a Russian company in how we operate, and he respects that. That's how I am looking at it, not in terms of comebacks. I think Travis is going to be in a side role going forwards, but those are his words, not mine.

On the confusion whether Uber drivers are employees or contract workers

Our driver partners are entrepreneurs who work for themselves and can choose to use our platform as a tool anytime they want. They can choose to ride for a full day - though we have actually introduced safety features that restrict them from driving too long to ensure safety for our riders and drivers, not based on us acting like an employer.

Every time I have asked out driver partners what they like about our platform, they have replied that they like being their own boss, which gives them respect. These are micro-entrepreneurs and to try to fit them under older labour laws would be a real mistake.

I think this flexi-work model can go forward. Five years from now, programmers and engineers will be in a world where they say "I want to do three months here on this really cool project that Uber is running and then move on to something else for Amazon, then something else". That kind of a work model where entrepreneurs are in control of their skills, I believe, is going to be a big factor going forward. It would do regulators well to not try to fit this new model in any old model. It's going to take some dialogue to make this possible, but this is the kind of world we want to be a part of.

On plans for Southeast Asia

To lean forward and invest. We expect to lose money in Southeast Asia but will invest heavily in terms of marketing, subsidies, etc. because of the potential. So we are cautiously optimistic. Part of my history as the CEO of Expedia was driving growth organically and transactionally. If I look at Uber 10 years from now, I'm hoping that we'll have 80% of our growth organically and some growth in transactions as well.