A few analysts said that the spike in UB group stocks could be like a 'dead cat bounce', which speculators might use to exit from their long-held positions. 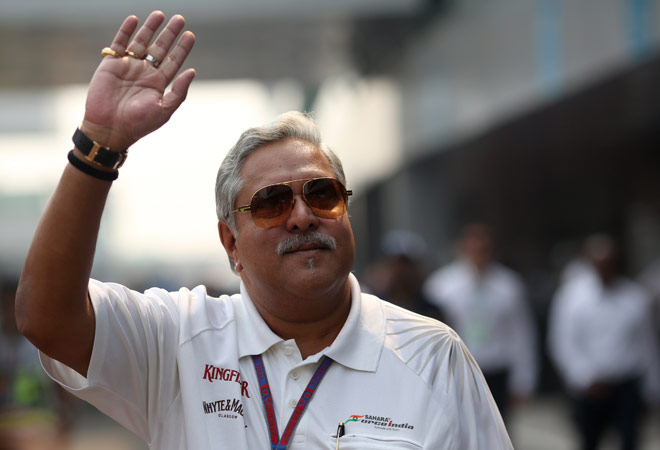 Vijay Mallya on Tuesday saw shares of his various group companies soar higher, in an irony of sorts, even as fresh troubles surfaced in form of the group's holding entity being slapped with yet another 'wilful defaulter' tag.

While most analysts have long stopped covering United Breweries stocks due to continuing troubles at various group companies and lack of liquidity, they were also taken by surprise to see a sudden spike of up to 20 per cent in share prices of group companies on Tuesday.

Some analysts said investors might be seeing the developments as a beginning of the end-game for Mallya, who no more has controlling stakes in United Spirits (USL) and United Breweries (UB) and his exit from MCFL and Kingfisher could leave UB Holdings (UBHL) as the only major entity where he may still have a significant role.

A few other analysts, however, said that the spike in UB group stocks could be like a 'dead cat bounce', which speculators might use to exit from their long-held positions.

The latest round of problems began last week with the minority shareholders of USL trouncing proposed financial dealings of the company with its erstwhile promoter Mallya, who remains its chairman as of now.

USL's controlling shareholder Diageo is mulling over ways to take forward the matter after an unprecedented activism on part of investors to reject a proposal involving business transactions between existing and erstwhile promoters.

In another major setback, the government rejected Mallya's re-appointment as managing director of Kingfisher Airlines, while he had to quit on his own from the board of MCFL on Monday.

Kingfisher, which had to be grounded in October 2012 due to severe financial crunch and mounting debt, had sought the Corporate Affairs Ministry's approval for Mallya's re-appointment for a period of five-year beginning October 16, 2013 "without remuneration", but the plea got rejected.

MCFL also announced Mallya's resignation on Monday as a director, without giving any reason.

The problems are expected to mount further as several banks, including public sector lender State Bank of India (SBI), are believed to have written to the boards of various UB group firms that no further loans would be provided to them in the wake of defaults made by Mallya and his group companies.

A senior banker said the loans availed by almost all UB Group companies indicated a complex web of transactions, where one entity was guarantor for the other and the second one took loans on the basis of guarantees given by yet another entity from the group or from among the promoters.

Notwithstanding the mounting troubles for the group, its holding company UBHL saw a 19.80 per cent surge in its share price to close at Rs 23.90 a piece on the Bombay Stock Exchange (BSE).

Shares of Pioneer Distilleries were also up 5 per cent.

Trading in shares of two companies - Kingfisher and UB Engineering - got suspended on Monday due to their non-compliance to Listing Agreement norms.

Kingfisher, which once prided itself as the most luxurious airline with Mallya being known as the 'King of Good Times', alone used to command a market value of over Rs 10,000 crore once, but now stands at just about Rs 100 crore.

The overall UB group market value has tanked by over half in the past one year, while excluding United Spirits.

The penal action by domestic bourses followed the companies' inability to prepare and publish financial results in time, which the firms have attributed to lack of staff.

Kingfisher has previously faced strong staff protests for non-payment of salaries, while it is also under regulatory scanner for various accounting lapses.

Mallya was serving as CMD of Kingfisher, which has been without a full-time CEO ever since Sanjay Agarwal left the company in early 2014.

As per the norms, a company, which is in the red or has inadequate profits, needs to approach the Corporate Affairs Ministry to get approval for appointment of key managerial personnel and directors and get no-objection certificates from shareholders and lenders.

The Ministry rejected the proposal in this case as it was already turned down by shareholders and lenders, sources said, while adding this particular decision was not directly linked to Mallya being declared a wilful defaulter.

The UB group has been seeing continuous troubles on various fronts for the last couple of years, beginning with a major cash crunch and high debt at Kingfisher Airlines. There are also pending service tax default cases against Kingfisher.

The group, which is also engaged in legal tussle with lenders, later sold a controlling stake in its prized unit USL to Diageo while some other assets were also divested in other businesses and two rival bidders came up from MCFL.

Default on loan payments has already seen a number of banks resorting to legal options to reclaim their funds, while some of them have also declared Mallya as a wilful defaulter.

The carrier is yet to submit its annual financial results for the 2013-14 financial year to the stock exchanges.