Vodafone, the country's second-largest telecom operator, is already fighting a separate Rs 3,700 crore tax notice in a transfer-pricing case related to the sale of its Pune BPO arm to an offshore group entity in FY08. 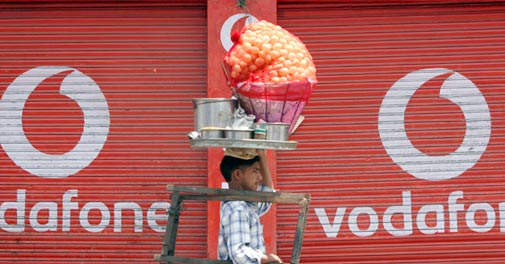 The Bombay High Court on Thursday stayed a new income tax demand of Rs 3,000 crore on Vodafone India Services in an alleged transfer-pricing case from 2010-11.

The new case pertains to the transfer of shares by Vodafone India Services to its parent company in FY11.

Vodafone , the country's second-largest telecom operator, is already fighting a separate Rs 3,700 crore tax notice in a transfer-pricing case related to the sale of its Pune BPO arm to an offshore group entity in FY08.

The company is also in talks to resolve a capital gains tax demand from the government, even after it won the case in the Supreme Court.

The case arose from Vodafone's purchase of Hong Kong-based Hutchison Whampoa's stake in Hutchison Essar for over $11 billion in 2007. According to the IT department, the British telecom company did not deduct capital gains tax from the seller.

Hearing Vodafone's plea, a bench headed by Chief Justice Mohit Shah granted an interim stay till March 7 on the demand made by the Income Tax department in an order on Wednesday.

The court also ordered status quo on the new income tax order and asked the assessment officer not to take any steps until further orders.

The income tax department had issued a show cause notice to Vodafone on January 17, asking the company to pay Rs 3,000 crore as transfer pricing adjustment. The department said the shares issued to Vodafone's parent company had been undervalued.

After getting the showcause notice, Vodafone moved the Bombay High Court, challenging the transfer pricing adjustment of Rs 3,000 crore. The company today pleaded with the court to stay the demand until the matter was heard on merit.

Transfer pricing refers to the rate at which transactions take place between two related parties, usually belonging to the same group. In the other transfer pricing case in which the tax department had made a tax demand of Rs 3,700 crore on Vodafone, the bench decided to hear arguments on February 6.

The case was a fallout of an earlier transfer-pricing order that sought to add Rs 8,500 crore to the taxable income of the company from the sale of its BPO unit to an offshore entity.

Vodafone had challenged the demand before the Appellate Tribunal, which on December 27 stayed it for six months or till the final disposal of the plea, whichever is earlier.

The tribunal also directed Vodafone India Services to make an initial deposit of Rs 200 crore. The first instalment of Rs 100 crore was to be paid by January 15 and the second instalment of an equal amount is due by February 15.

Vodafone was also directed by the tribunal to provide corporate guarantees for the balance tax amount of Rs 3,500 crore by February 15.

The Income Tax department, in its petition, said the amount of Rs 200 crore to be paid by Vodafone was too low. The revenue authorities are of the view that the company should have been asked to deposit at least 25 per cent of the demand.

Vodafone had questioned the jurisdiction of the revenue authorities to add Rs 8,500 crore to its taxable income after scrutinising an inter-group call centre deal struck in 2007.

The tax department claimed the deal was an "undisclosed, international transaction," while Vodafone maintained transfer pricing provisions did not apply and the deal was not taxable as it involved two domestic entities.