SHEROES Report Women at Work, India 2014, looks at urban educated women and their efforts at work life balance, mapping them against the sectors they are in and the social backgrounds they come from. 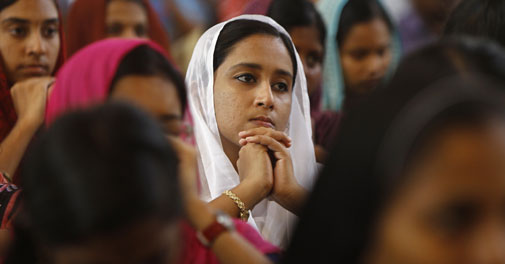 With International Women's Day in the offing, a new report - SHEROES* Report Women at Work, India 2014 - on the status of women in the country was released on Tuesday.

It looks at urban educated women and their efforts at work life balance, mapping them against the sectors they are in and the social backgrounds they come from.

The report surveyed 50,000 women, classifying them on the basis of their social backgrounds, employment seeking behaviour and articulation of work-life preferences and career life cycles over a period of one year. The study was conducted in more than 60 Indian towns and cities from Allahabad to Port Blair.

The biggest category of women - 24 per cent - among those surveyed fell in the 'New Tracker' category: early stage professionals, into their first job or an internship. The report notes that a large number of women professionals join the workforce at this stage and it's easier for businesses to induct and train them. Typical concerns of women in this category are lack of a visible roadmap in their careers, mentorship, and sometimes lack of family support or peer network.

The second largest group in the report was the one it classified as 'Off Trackers' at 23 per cent. These are women professionals with significant experience, skill and adaptability who have stopped working for various reasons, which can range from marriage and childbirth to having to take up care-giving roles in the family.

The report mentions that the Indian female workforce has an exceptionally high number of such women and it is because so many women 'drop out' that the number of women in leadership and mid-management roles in the country is low.

Looking for an alternative to a professional career, many are turning entrepreneurs. It highlights how 'momentrepreneurs' and women owners of small/medium businesses are growing, with 11 per cent women falling in that bracket. These include home based businesses, boutiques and custom fit lifestyle businesses. With the digital space in India expanding, the number of such women will keep growing.

Sairee Chahal, Founder SHEROES, points out that, according to the International Labour Organisation, India ranks in the bottom 20 of a list of 131 counties in female labour force participation. "Senior level female employees in India are just 5 per cent compared to the global average of 20 per cent," she adds. "In India almost 48 per cent women drop out of workforce before they reach the middle of their careers, compared to the Asia regional average of 29 per cent."

(*An earlier version of the story had incorrectly spelt the organisation's name. It has now been corrected to SHEROES.)