Airbus announced its first jet order from Japan Airlines, worth $9.5 billion, breaking open the last major aviation market dominated by rival Boeing Co after delays and a grounding of its 787 Dreamliner cast a shadow over its reliability as a supplier. 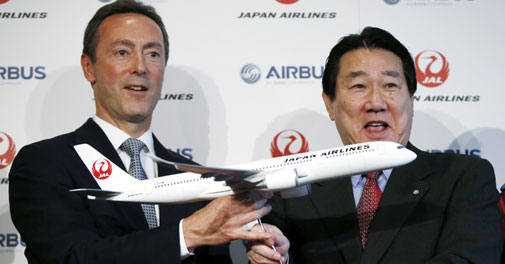 Airbus announced its first jet order from Japan Airlines Co Ltd (JAL) on Monday, breaking open the last major aviation market dominated by rival Boeing Co after delays and a grounding of its 787 Dreamliner cast a shadow over its reliability as a supplier.

The landmark deal for 31 wide-body A350 jets with a combined $9.5 billion list price follows an intense battle between the planemakers as Japan's two top carriers seek dozens of new long-haul jets over the next decade.

The agreement includes options for another 25 of the A350s, bringing the potential size to 56 aircraft.

"This is a huge win for Airbus and a big loss for Boeing," said aerospace analyst Scott Hamilton, managing director of Seattle-based Leeham Co. "Airbus has been trying to break the wide-body monopoly of Boeing for decades and likewise Boeing has been wanting to keep Airbus out of JAL and ANA."

US planemaker Boeing has long seen off attempts by Airbus to secure an order with JAL, benefiting from links with Japanese suppliers and deep political ties between Tokyo and Washington to maintain a market share of more than 80 per cent.

Delays to its 787 Dreamliner and its subsequent grounding after its batteries overheated have, however, tarnished its image and cast doubt on Boeing's ability to deliver aircraft on time, industry experts said. Both JAL and its domestic rival ANA Holdings Inc are major Dreamliner buyers.

At the same time, bureaucratic and political influence over the fleet purchases of JAL, which the government bailed out in 2010, has waned since it went public again a year ago and the Democratic Party government that rescued it lost power.

"This is seriously bad for Boeing. They need to do a little soul searching," said Richard Aboulafia, airline analyst with the Virginia-based Teal Group. "(The 787 problems) inevitably led to doubts about execution, resources and time."

The deal, in which the A350 vied with Boeing's yet-to-be-launched 777X, and its impact on wide-body competition are likely to dominate a major aviation industry gathering in Barcelona this week.

JAL's new Airbus aircraft will begin entering into service in 2019, the companies said.

The battle between the two aircraft makers will now shift to ANA, which is also looking for around 25 new jets to replace its aging fleet of long-haul Boeing 777s from 2020.

ANA is still gathering information on the 777X and the A350, Ryosei Nomura, a spokesman for the airline, said.

"This is Airbus' largest order for the A350 so far this year and is the largest ever order we have received from a Japanese airline," Fabrice Bregier, chief executive of EADS subsidiary Airbus, said on a conference call. "I must say that achieving this breakthrough order and entering a traditional competitor market was one of my personal goals."

Boeing said it was disappointed but respected JAL's decision. "We have built a strong relationship with Japan Airlines over the last 50 years and we look to continue our partnership going forward," a company spokesman said via email.

If they chose Boeing's 777X, both JAL and ANA would have to commit to being a launch customer again for a new Boeing jet.

Delays to the 787, which is one-third built in Japan, and its subsequent grounding may have made JAL wary of buying an aircraft that Boeing has yet to officially commit to building. That concern has given Airbus a rare opening in Boeing's best market.

"It's the price to be paid for passivity, by not launching this plane one year ago," said Aboulafia, referring to the 777X.

With the world's biggest fleet of Dreamliners and the first to fly the innovative carbon composite plane, ANA has been most affected by delays and the aircraft's grounding this year resulting in millions of dollars of losses.

Helping Airbus's sales pitch have been orders for its A350s from marquee customers such as Cathay Pacific Airways, Singapore Airlines, Qatar Airways, Emirates Airline and Deutsche Lufthansa. The base model of the A350 enters service in 2014.

Boeing, which is working on deals with Gulf carriers, also counts Lufthansa as a customer for its 777X.

In a sign of how JAL's once cosy government ties have become strained, particularly in the wake of its taxpayer-funded rescue, the carrier on Friday complained that it was unfairly treated over landing rights at Tokyo's Haneda airport after ANA received twice as many new slots.