Hundreds of workers shouted slogans outside a Nokia factory in southern China to protest against what they called unfair compensation after the company sold its mobile telephones business to Microsoft Corp. 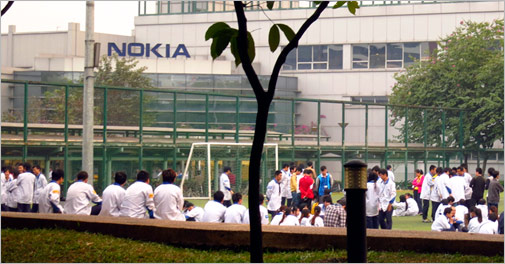 Nokia factory workers protest on a football pitch outside the factory in Dongguan, Guangdong province, China on November 20, 2013. PHOTO: Reuters

Hundreds of workers massed outside a Nokia factory in southern China on Wednesday to protest against what they called unfair treatment following the sale of the company's mobile phones business to Microsoft Corp.

The Finnish handset maker in September agreed to sell its devices and services business and license its patents to Microsoft after failing to recover from a late start in smartphones. The sale is due to close in the first quarter of next year.

Workers outside the factory gates said they were battling to change new contracts offering them worse employment terms that they said they had been forced to sign after the September deal between Microsoft and Nokia.

"We will definitely continue to fight until we get what's fair," said Zhang, a young male worker who gave only his surname.

But in emailed comments to Reuters, Nokia said interaction between protesters and police had been "restrained (and) peaceful", adding it was continuing to talk to the protesters.

About 30 police officers kept watch as workers clad in white Nokia uniforms held up banners with the slogans "Legally protect our rights" and "Demand fair compensation."

Six protesters interviewed by Reuters said they had not heard from management. "They won't do anything until things reach a critical stage," said another worker who gave only his surname, Yang, and said he had worked at the factory for two years.

The precise nature of the employees' grievances was not immediately clear, but an industry source with direct knowledge of the protest said Nokia had balked at what it saw as a demand for severance packages to workers who would retain their jobs under Microsoft.

The source, who declined to be named, said he did not expect lay-offs at the 5,000-worker plant as a result of the deal with Microsoft, and denied claims from factory workers interviewed by Reuters that the Microsoft deal affected the pay of thousands of employees.

Lack of trust in employers has often led Chinese workers to balk at takeovers they fear will worsen employment conditions, and the confrontation in the industrial city of Dongguan marked the latest incident in a wave of industrial unrest at Chinese affiliates of foreign manufacturing firms.

In July, workers at a joint venture of US-based Cooper Tire & Rubber Co and state-owned tyremaker Chengshan Group went on strike after Cooper agreed to be bought by an Indian firm. Protesters said they doubted the ability of Indian tyremaker Apollo Tyres to bail out Cooper's debts, and Chengshan eventually asked to dissolve the partnership.