The US drugmaker Pfizer has raised its offer for the British rival to 55 pounds a share and would walk away if AstraZeneca did not accept it. 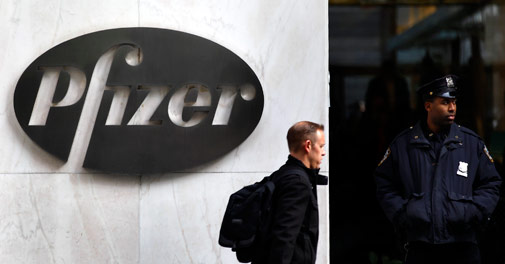 US drugmaker Pfizer has raised its offer for British rival AstraZeneca to 69.3 billion pounds ($116.6 billion), or 55 pounds a share, and would walk away if AstraZeneca did not accept it.

But the latest bid was still viewed as falling short of properly valuing AstraZeneca and the company is likely to publicly reject it as early as Monday, according to the Financial Times, which cited people familiar with the matter.

Pfizer wants to create the world's largest drugs company, with a headquarters in New York but a tax base in Britain, where corporate tax rates are lower than in the United States. It has met entrenched opposition from AstraZeneca, as well as many politicians and scientists who fear cuts to jobs and research.

The US group on Sunday said its new offer was final and could not be increased. It said it would not make a hostile offer directly to AstraZeneca shareholders and would only proceed with an offer with the recommendation of the AstraZeneca board.

Pfizer also increased the cash element in its offer to 45 per cent, with AstraZeneca shareholders set to receive 1.747 shares in the enlarged company for each of their AstraZeneca shares and 24.76 pounds in cash.

The new offer represents a 15 per cent premium over the current value of a cash-and-share approach made on May 2 - worth 50 pounds a share at the time - which was swiftly rejected by AstraZeneca.

Pfizer also revealed it had written to AstraZeneca's chairman on May 16 offering 53.50 pounds a share - 40 per cent in cash - but had been told that this still substantially undervalued the company, prompting it to make the latest last-ditch offer.

"We believe our proposal is compelling for AstraZeneca's shareholders and that a Pfizer-AstraZeneca combination is in the best interests of all stakeholders," Pfizer Chief Executive Ian Read said in a statement.

He expressed frustration at AstraZeneca's refusal to engage in talks and urged the British company's shareholders to pressure its board to start discussions.

"Following a conversation with AstraZeneca earlier today, we do not believe that the AstraZeneca board is currently prepared to recommend a deal at a reasonable price," Read said. "We remain ready to engage in a meaningful dialogue but time for constructive engagement is running out."

According to the Financial Times, AstraZeneca executives also felt that Pfizer failed to give assurances on other key terms of a deal, including commitments to the UK group's research and development programs.

Two banking sources earlier described 55 pounds a share as the "magic number" at which a deal could get done and Selvaraju of Aegis said Pfizer's declaration that its offer was "final" would concentrate minds at AstraZeneca.

"The main thing that will be likely to get AstraZeneca to engage is that Ian Read, who is a tough guy, has basically said this is our final offer," he said.

In the absence of further discussions or an extension of the deadline for making a firm offer under British takeover rules, Pfizer's proposal will expire at 5 pm London time on May 26.

An AstraZeneca spokeswoman said she had no immediate comment on Pfizer's latest proposal, which would see Pfizer shareholders owning 74 per cent of the combined company, with AstraZeneca shareholders holding 26 per cent.

The increased offer had been widely expected. Pfizer said last week it would consider a higher offer as it urged AstraZeneca's board to enter talks.