Restrictions on business and commercial activities since March has led to a sharp decline in the revenues of the state governments, who have turned to market borrowings to support their finances A total of Rs 14,000 crore has been raised by 13 states at the auction of state government securities or state development loans (SDLs) held on Tuesday. This was Rs 1,500 crore more than the notified amount of the auction as two states - Maharashtra and Telangana accepted an additional amount of Rs 1,000 crore and Rs 500 crore, respectively.

So far in the current fiscal year between April 7 and September 20, as many as 27 states and two union territories (UTs) cumulatively raised Rs 3.11 lakh crore via market borrowings, translating into a 52 per cent jump from the corresponding period last year, highlighted a CARE Ratings report. 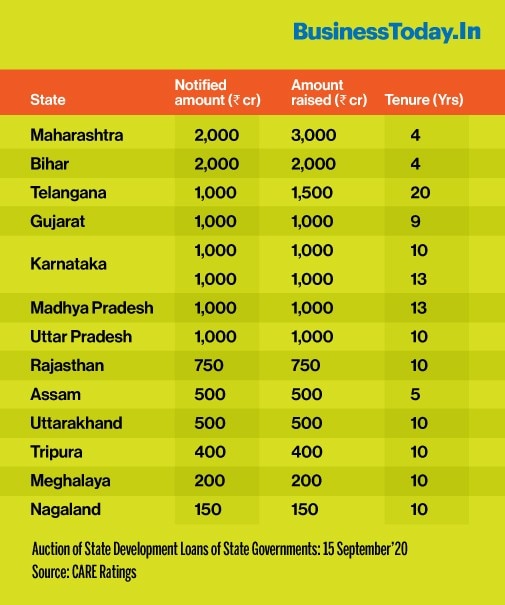 The lockdown and the resultant restrictions on the conduct of business and commercial activities since March has led to a sharp decline in the revenues of the state governments, coercing their finances. To meet their funding requirements, states have been increasingly resorting to market borrowings. Of the 27 states that have issued SDLs so far in the financial year, four states - Karnataka, Maharashtra, Tamil Nadu and Nagaland - have seen their market borrowings increase by over 100 per cent while six states, namely Chhattisgarh, Madhya Pradesh, Meghalaya, Haryana, Andhra Pradesh and Odisha have seen an increase of 50-100 per cent and eight states have seen an increase of 13-47 per cent, the report added.

Tamil Nadu, Maharashtra, Andhra Pradesh, Rajasthan and Karnataka have been the largest borrowers, accounting for 54 per cent of the total state borrowings so far in the current financial year.