The 24-year old trade union activist Nodeep Kaur was arrested when she joined a labourers' protest at Kundli in Haryana. The activist has been in custody since nearly a month without bail 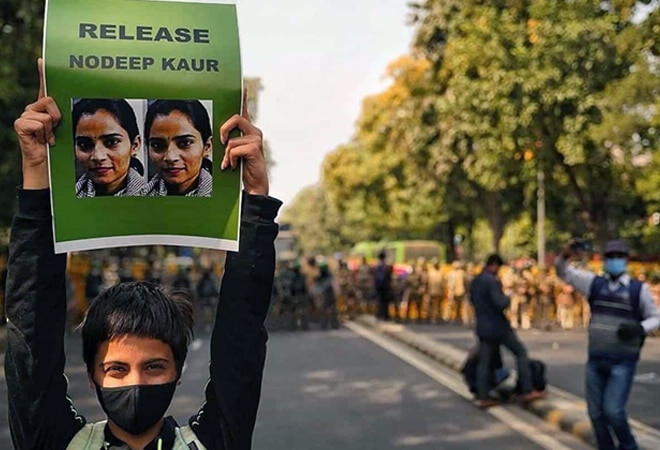 Kaur, who is a resident of Gyandar village under Kakhuwali Mandi police station in Punjab's Muktsar Sahib, was arrested on the basis of an FIR under Sections 148 (rioting), 149 (unlawful assembly), 323 (voluntarily causing hurt), 452 (trespassing), 384 (extortion) and 506 (criminal intimidation) of the Indian Penal Code (IPC).

The case was filed as per a complaint by Lalit Khurana, an accountant at Elecmech Private Limited, Kundli. The accused Nodeep Kaur along with two other women and over 50 men entered the company office and started demanding money.

The police complaint accessed by India Today reads, "When we refused, they created a ruckus and threatened us of dire consequences. We called the cops who were also beaten up by the accused and her accomplices."

The FIR states that Inspector Ravi Kumar and two constables got injured in the incident because of stone pelting and were attacked with sticks as well. The FIR further added, "The accused also tried to snatch a carbine from a gunman besides a file from head constable Rakesh."

It also states that the police officials managed to arrest Kaur with the help of lady constable Rita and also conducted raids to arrest the other co-accused in the case. Kaur's bail plea has been quashed multiple times.

Meanwhile, her sister Rajveer Kaur, a research scholar at the Delhi University has denied these allegations and said, "My sister is a labour and Dalit rights activist. She along with other activists had gone to get the wages of some labourers released, but the owner of the factory opened fire at them. The allegations are false. We also tried to lodge a complaint but that was not entertained."

Police officials have, however, trashed these allegations and said Nodeep was facing two other criminal cases. Sonipat SP Jashandeep Singh Randhawa said, "This is not the first case registered against Nodeep Kaur. She is already facing a criminal case. The allegations are not false as the CCTV footage recovered from the factory premises shows the accused and others assaulting the cops."

The case garnered international traction as lawyer and US Vice President Kamala Harris' niece Meena Harris tweeted about this using the hashtag #ReleaseNodeepKaur.

Weird to see a photo of yourself burned by an extremist mob but imagine what they would do if we lived in India. I'll tell you—23 yo labor rights activist Nodeep Kaur was arrested, tortured & sexually assaulted in police custody. She's been detained without bail for over 20 days. pic.twitter.com/Ypt2h1hWJz

This isn't just about agricultural policy. It's also about the persecution of a vocal religious minority. It's police violence, militant nationalism, and attacks on labor rights. It's global authoritarianism. Don't tell me to stay out of your affairs. These are all of our issues.

Canadian MP Gurratan Singh also said in a tweet, "Nodeep Kaur, an advocate for Dalit and Worker rights from Punjab, was picked up by the police 21 days ago for supporting farmers. She's been tortured and sexually assaulted in custody. She was denied a medical exam and bail. Calling on leaders to raise their voice for her. #FreeNodeepKaur"

We are all deeply concerned about #NodeepKaur ! A female activist in India

She was arrested by Delhi police, we are hearing reports of sexual abuse in custody! @AmnestyUK@hrw@meenaharris#FarmersProtesthttps://t.co/WPehYrZfEu

this is a travesty. nodeep’s bail hearing is today. punjab’s politicians are absolutely useless. cowards. all of them. shame on the entire system for letting nodeep down (and countless others in similar situations) https://t.co/d6LDLhjHNa

Arresting #NodeepKaur not going to stop the #FarmersProtest. Better release her and respect women!#SpeakUpForNodeep